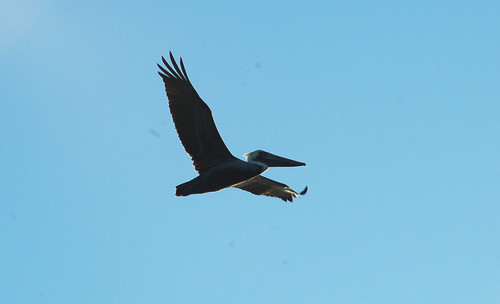 another in my sea creatures set that i am working on. taken with my new 85-210mm tele (that i got at the flea market for $21, yes we are still bragging about that) i love this tele, it's hefty enough that it doesnt feel like a toy, fairly easy to use, super easy to focus, and the clarity on it can't be beat. this is as close up as i have gotten a shot on a pelican and i was further away than usual as it flew by. pelicans are totally the bomber planes of sea birds. they like to glide over the bay, wingtips at about 5inches above the water level. my next project i think, will be to stalk the hawks and peregrines around our mountain, they are considerably harder to shoot however, what with all the trees in the way.

in other news, i am going to have a cookie making party on dec 13th in the afternoon at our place. i will be posting another post shortly detailing how Yura's mom made us Oreshki, tiny filled ukrainian cookies that look like little nuts. we are going to get the oreshnitsa (the special pan you use to make them) and make several kinds of international cookies for our xmas boxes this year. let me know if you are interested in coming!

as most of you know, yuriy, my boyfriend, is a russian immigrant who came here as a teenager. while we were visiting his family in orange county this year, his mother made some traditional ukrainian cookies BY HAND with us. god, they are soooo good. they are called oreshki and are made by baking the halves, then filling them with a mixture made of nuts, leftover crumbs from making the cookies (for extra crunch), hazelnut paste, and condensed milk that has been boiled in the can for many hours to make it taffylike. 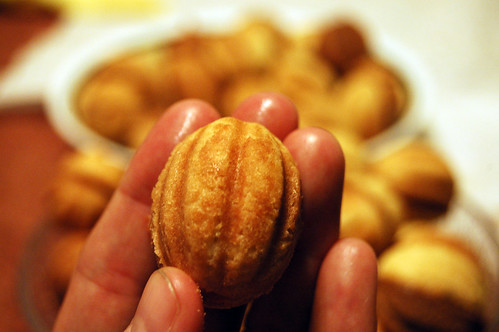 here is a finished oreshki. look how delicious that looks! 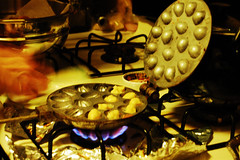 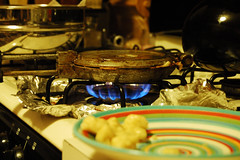 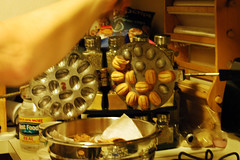 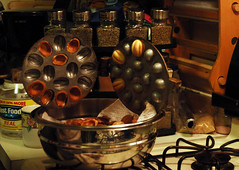 you start out by rolling bits of the dough and putting the balls into the oreshki cookie half cavities. then close the oreshnitsa (cookie pan), and grillbake them on both sides over an open flame for about 5mins each or until golden brown (you can check them if needed but after awhile the timing becomes natural). 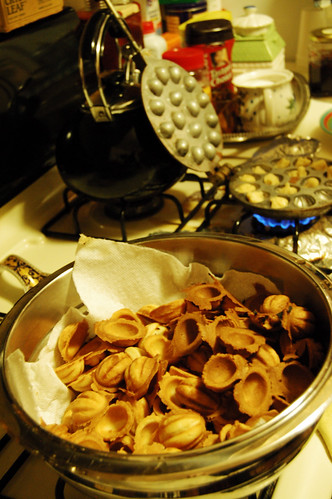 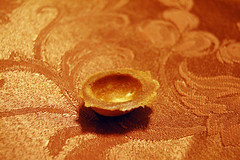 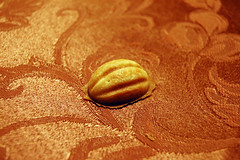 when each batch is finished dump them into a bowl to cool. while they are cooling, assemble the filling in another bowl. 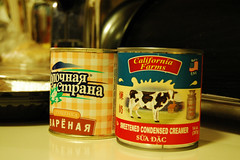 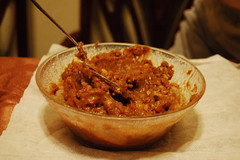 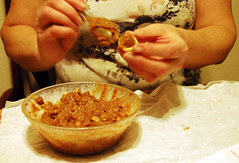 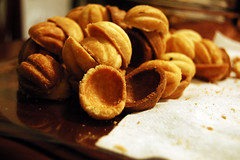 take a can of boiled condensed milk (boil the can unopened in water for about 2 hours or more), nuts, hazelnut paste, and mix together. take the bowl of halves and clean the edges on them so they don't have extra dough pieces. use the crumbs you trimmed off to add to the filling paste for more crunch. fill each halve exactly halfway with filling (don't overfill or you won't be able to press them together) 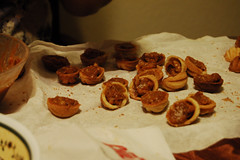 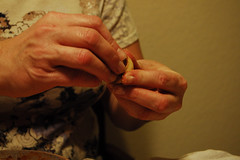 assemble the oreshki by firmly pressing the two filled halves together (this is why you are careful not to overfill, the filling is VERY thick and pastey and will not smoosh out the sides, instead the cookies will shatter because they aren't very strong) after assembling all of the halves, eat the finished oreshki and enjoy your hard work! oreshki means "little nut" which is why these traditional cookies are shaped like little nuts! i will have a real recipe up later this month after our cookie party. 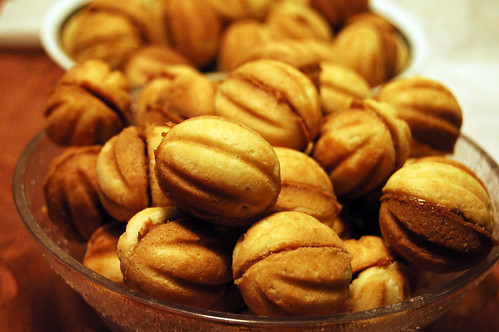