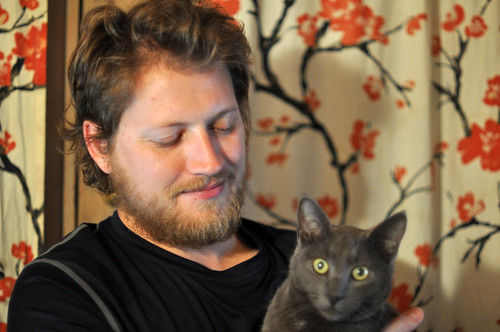 hello lj! with all of the birthday festivities over, it is finally time to get back to the real business of this journal, complaining! wah i have an ear infection! wah! but wait hep, says the audience, weren't you just on antibiotics for like an entire decade and are now paying the gastrointestinal price? why yes i was! luckily for my fears and mental sanity, all of zane's ear, nose, and throat problems have left me highly educated on the state of ears, all the myriad problems that can occur, and how most "ear infections" aren't actually infections at all, but buildup of fluid in the ears, and doctors usually prescribe antibiotics in those cases because infection is often just around the corner from fluid buildup. so i will avoid my 15th doctor visit in as many days and just try to wait it out. now, i am a pain champ. most of the time i don't even notice i have various body breakages, i have walked around on broken limbs for weeks, and passed entire multiple mm wide kidney stones without even noticing until the gravel came out, as it were. ear pain however, is my one true weakness. i can disassociate from any pain, as long as it is outside my head. however ear pain, and by extension tooth pain, i can't get far enough away from. 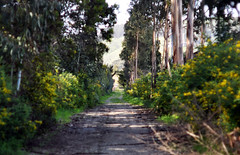 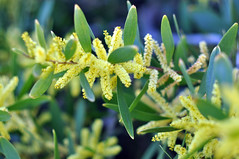 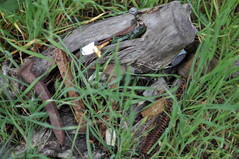 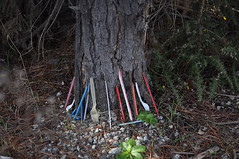 these images are from our walk last weekend. there is a hiking trail loop near our house, and there are all these strange little shrines made out of debris and trinkets. when you first come across one you can just pass it off as a weird collection of trash, but they are roughly every quarter mile and super weird. sometimes there will be stuff worked into cracks in a tree or log, sometimes it will just be a carefully erected grouping along the base of a tree. i never move anything because, hello? i have seen horror movies? but hopefully these pictures won't bring the crocker ghost to my door all "whereeee's my pixeeelllls?" 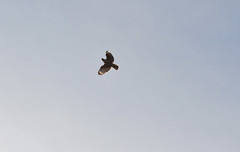 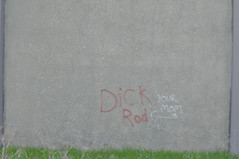 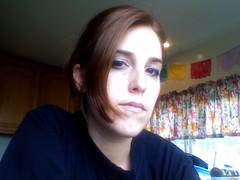 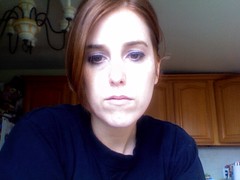 you can also see the sad state of graffiti affairs around here. some of these kids need to learn that when you go muraling, you need to bring more than two cans of paint. perhaps i should start a graffiti class at our local community center so that these kids can stop putting forth their sad efforts to compete with the sunnydale kids. we also found a whole bunch of these brownish stippled hawks living in the woods back there. they are obviously not red-tails, i am going to do some research and find out what they are. 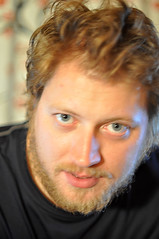 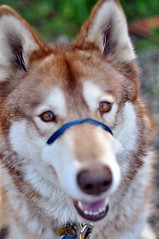 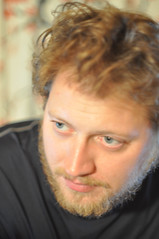 this weekend the children are going away to visit their grandparents, so i have a rare free entirely child-less weekend in which i can engage in adult activities and wear clothes i don't have to worry about getting spilled on.

demure will also be coming back to the bay this weekend and spending some time with her will be awesome. she flew out to visit hawaii last week, after spending the night here and having a slumber party, and it was so nice to see her and hang out. she also approved of the newest addition to the family which is... 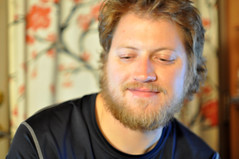 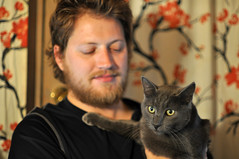 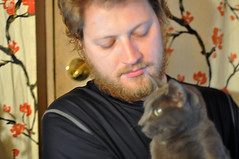 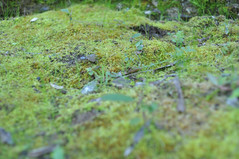 yuriy is growing a beard. i am not too sure how i feel about it, i have never dated someone with real facial hair before. it reminds me too much of my dad who enjoys rocking the "eastern european terrorist chic" look much of the year (tho he shaves down to what we call "eurotrash mustache" during the spring and summer) however, i love that yura's beard is red. it is almost the same color as my hair! and it's kind of super hot to be dating an extremely built, strong, rugged mountain man even tho that is the furthest away from my type possible. i like to be the one who can beat the other person up in a relationship. i keep calling him a russian bear. is this what a bear is, gay friends? i am unsure on the concept. there is no body hair elsewhere, in true russki style. the beard won't last very long (he can't stand the itching) but it is really fun to play with while it is here.

before i go, a ton of links that i have been saving and haven't had time to drop and really talk about:

acorn cleared of conservative entrapment.
discussion of the evelyn evelyn, ableist ableist issue
an even better writeup on same issue
original blog post by amanda whining palmer where she turns the disabled into a cute recordselling marketing ploy with a side of child rape thrown in
second amanda facist palmer post where she tries to justify her cultural appropriation and prejudice by whining about how she is white, while avoiding any hint of an apology or discussion of the actual problematic issues people brought up the comments in both of her entries are where the real gold is
build your own chicken coop for my all my chickfolks out there!

i ganked the link from

hexkitten and i am... trying... to make my way through this article:

Why Are Nice, Normal Girls Getting Bullied Online?
from GLAMOUR
Because all it takes is one jerk with a log-in and a grudge to launch a vicious, nameless attack against you. Here’s how Meghan Pearce and other young women are fighting back...

In the face of this public humiliation, Pearce’s confidence plummeted. She doubled her workouts and briefly considered cosmetic surgery. I have a boyfriend, I don’t go out much, I try to be nice, Pearce said to herself. Who would do this to me?

really? your self-esteem is that low?

Cohen didn’t let that stop her. She asked a court to force Google, whose subsidiary hosted the blog, to identify the site’s author. Last August, in what legal experts call a precedent- setting ruling, a judge ordered the company to disclose the Skanks in NYC author’s e-mail address. Google, which has always defended the privacy of its users, said in a statement that it would provide such information only in response to a court order.

i am sure this precedent won't ever be used to compell information and quell free speech making comment on the government. you totally thought the consequences of your little internet insecurity exercise through.

Although it’s impossible to get a gender breakdown of anonymous posters, the
tone of most of the comments on The Dirty is distinctly male. Where is all of this venom coming from? According to Danielle Citron, a professor at the University of Maryland School of Law who studies online bullying, the Web has become a haven for women-haters, partly because it’s no longer socially acceptable to sexually harass women at work or school. “We’ve pushed a lot of that animus to the Internet,” she says. “That’s where men who resent women—perhaps because they feel outpaced by them at work or school—can express it anonymously.”

no.fucking.shit. like seriously, as any girl who has had to work in any male dominated field can tell you, working in those fields can suck because of all of the various kinds of male attention you receive. however, you can't let that affect you. like seriously, the second you let it sway you, you have let them win. sure, if someone is actually sexually harassing you or holding you back, use every recourse available to punish them. but just because someone said mean things about you on the internet, letting that affect your personal self esteem gives them so much emotional power over you, why would you give that to someone you don't actually respect? i respect my friends and family and i value their judgement. to a certain extent there are some other people's judgements that i value. beyond that, i don't really care what people think (as evidenced by my entire life) and i certainly don't care whether they find me attractive or not. and i _most_ certainly do not base my self-esteem on that.

i could go on, but the only thing i see about this entire thing is the implications for free speech as a whole. soon you won't be able to dissent against the government because, forget warrentless wiretaps, they will just be able to subpoena your anonymous critical comments since, after all, that one judge did it for some mean things on the internet! i realize i should take any article in fkn *glamour* with a huge grain of salt, but i am so seriously annoyed. argh! trolled by fashion mags once again.
Collapse