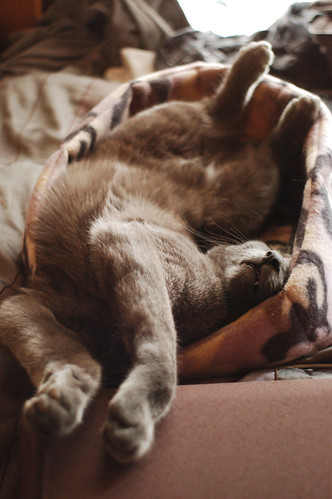 i haven't updated in forever. i have been pretty busy. let me see if i can recap real quick, but these events may be out of order. a few weekends back evan had a starcraft LAN party for his bday. 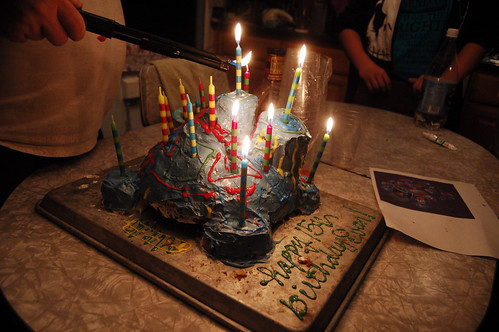 i built him a 3d starcraft terran base cake. i did not have enough red to do true purple colored, so it is protoss colored which is his actual favorite team, just protoss stuff would have been so much more of a pain to sculpt. plus like at least 3 more crumb cake layers. when he blew out the candles he again did the teenager 'put the last one out by licking his fingers and pinching it' trick. i lol 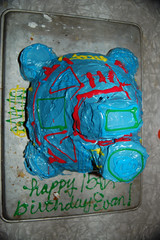 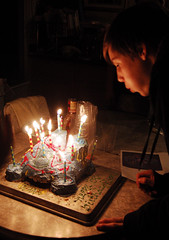 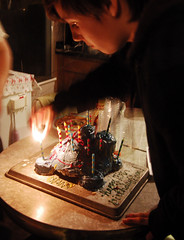 so i had an overnight house full of teenagers, plus zane. luckily we shipped zoe off to a friends house. they played starcraft until 5am, then slept briefly for a few (short) quiet hours before starcrafting until i kicked everyone out at 5pm. the below picture is from many of the boys and zane simultaneously petting kalashnikov. despite his face expression, he is loving the attention. right after i took this shot i made them all leave him alone, and he promptly climbed right back in zane's lap for more abuse^Wlove. 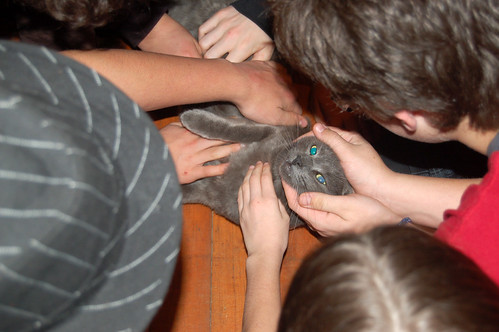 i have also been up at the school quite a bit lately. we went on a field trip downtown to the asian art museum and city hall with zoe's class. the asian art museum field trip is particularly cute, they teach them a lot of the customs and history of feudal japan, and then introduce that to the converse life of china at the time. the current exhibition is a lot of laotian and thai artifacts. unfortunately, because of the children's class that the docents teach, and the fact that the second half of the day was spent in city hall, we only got a very short time to wander around. 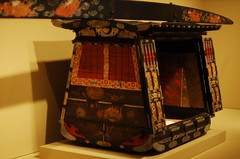 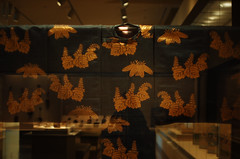 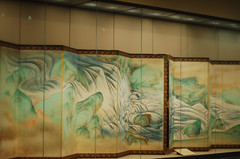 there have also been a million other school things lately. i always forget how busy the beginning of spring is at the schools, and with three schools now, that is 3x the help they all need. i volunteered up at evan's school to be an evaluator at the senior exhibition. the seniors have to write a 20-30 page debate paper on the (serious) topic of their choice. I got to judge two papers, one about the factors determining success in hiphop (really well researched and thought out. included an accurate history of hiphop and decent analysis of the factors that made various hiphop artists successful) and one about the benefits of music piracy, which was brilliant. he had amazing visuals, it was clever, engaging, and hilarious, while also introducing a lot of statistics and math analysis. i love this kind of project based teaching, because it is so much more true to what you have to produce in college. there are very few fill-in-the-blanks photocopied worksheets once you graduate high school. 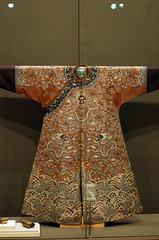 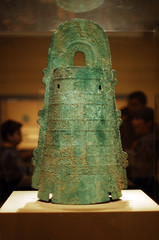 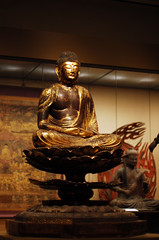 we also spent a weekend or two working in the garden. we got the chicken coop relocated to the summer lot. now we let the previous lot drain and set for several months, and when the soil isn't so hot it will be perfect for fall veggies. i prepped several of the other beds, got seedlings started inside, got the one wind-protected bed sown outdoors. i also reset the paving stones and planted more groundcover between the gaps, and put new jasmine in to climb the chimney. 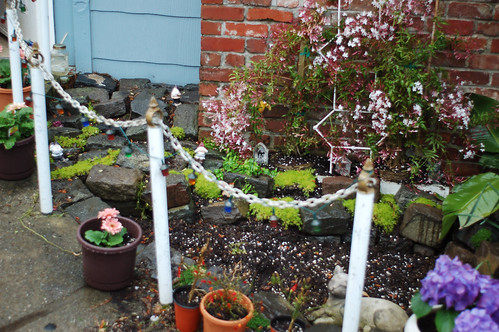 now at least the front door looks nice. i am working on the side of the house seen send most-often next. plus i need to get the summer veggies in asap. all plans for next weekend! 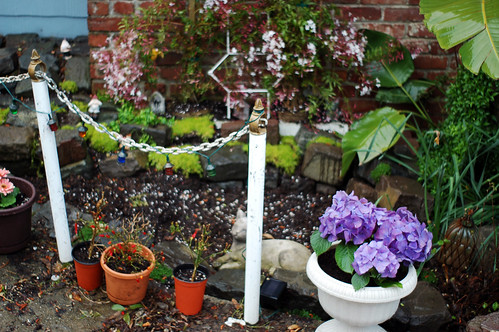 AND we put in a pond! finally, i have been lugging this pond liner around for about ten years and several moves. we spent one weekend putting it in and stocking it with water plants and adequate filtration. after letting it settle all week and building several fishle hiding spots, we stocked it with some goldfish this weekend to see if they can survive the assault of the raccoons. 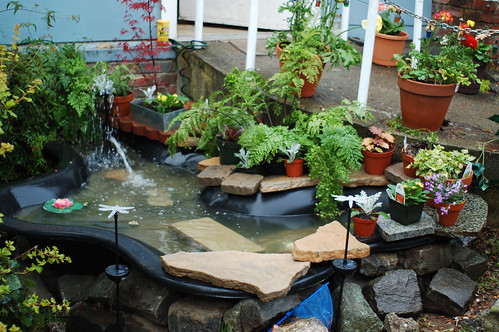 we also put in a tiny japanese maple, color "moonfire". it is so cute and adorable, and hopefully i have put it in a place with enough of a windbreak, we get some vicious winds over the summer into fall. 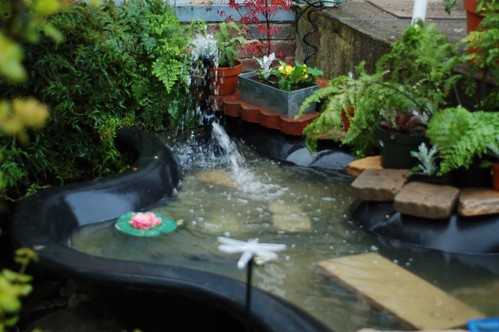 also on a sadder note, one of my "uncles" died this last week, and the funeral was a few days ago. i have many uncles, my actual uncles are called 'tio', tio johnny, tio jimi, etc. but my uncles are "friends of the family who have been known to us for so many generations, that they might as well be family because you have to invite the whole lot of them to the weddings". where we live that is a concept because everyone is from here, for several if not many generations. 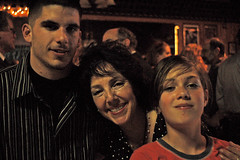 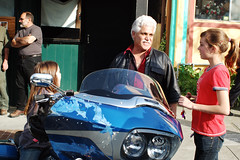 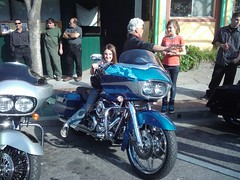 the wake was a lively affair (i did not make it to the funeral as I had to work and the girls' had school), held in the town bar with many generations of town residents in attendance. uncle dean was a super nice guy, in fact he is the one playing with me in the fullsize version of the pic frm my icon: everyone there was celebrating his life instead of mourning his death. he was an ironworker, and the various ironworker motorcycle gangs were all there in their leathers. there were motorcycles parked two by two for 2 blocks on both sides of the street. zane sat on my uncles motorcycle for awhile. apparently my cousin zak (above in the pic with my mom and zoe) got his first one (he isn't even 21 yet) so i am assuming i will be visiting some hospitals in the near future. just in case you all wonder why i hate getting photographed with no makeup, plz observe the results here by my cousin:

can we all agree i look dead and stop asking to take my picture when i point out that i just got a pint of blood sucked away :( these were all taken by my cousin angela, of various uncles, aunts, and my mom (the super short one in polka dots. you can see what i mean by all of my mom's brothers and sisters were 6ft except her. she was under 5ft just like me and my grandma)

if you wondered how the funeral ended:

and also this mural in the bar is awesome. i always remember looking at it as a little kid, some of my earliest memories are of bbqs and events in this bar (it doubles as a community center sometimes. it serves food so kids are allowed, but it is very much in the style of a bar) 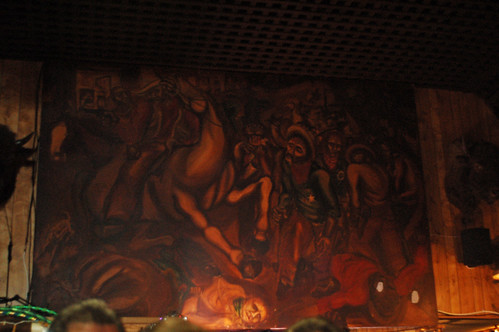 there was also another birthday in here which was SUPER important, but it will be getting its own entry when the aforementioned birthday events have been concluded. 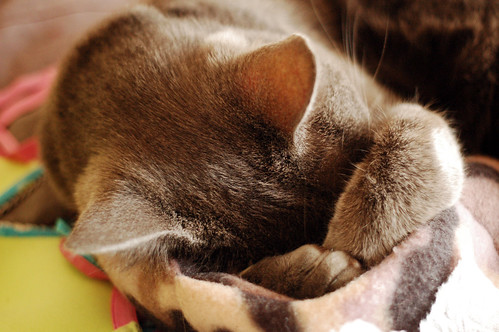 one more pic to kill your fpages. kalashnikov is being cute and sleeping on my bed in his tiny little cat bed that he drags around.