i have done this meme before, but i am going to do it again in lieu of writing a real entry because i am too tired to think beyond prompts right now. i am also going to try to illustrate in jpgs. 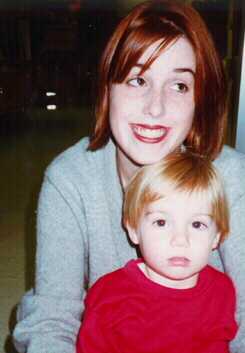 15 Years Ago (June 1996), :
1. Evan was 1.5ish. We lived in a punk rock house in the northern north bay. I took him to a lot of shows, particularly at the phoenix theatre. he had this set of those giant sound dampening headphones that air traffic controllers wear. my stepdad got them for him for going to see him race out at sear's point raceway, so i just kited them for him to wear at punk shows. he was one of like 3 kids that regularly hung out there. i believe i had broken up with cj by this point and was dating roger. i had finished high school and was studying photography, and also working afternoons and weekends with a photographer shooting high school senior portraits, formal dances, and weddings. i had yet to be disillusioned by photography as an industry. i had been on the internet for like 7yr by that point, but not yet the real internet except rarely. i was definitely on sfnet by this point tho, as well as like 50 other boards. the only things i could hack were the library of congress and bbses. i still used a commodore 64 half the time, due to what we like to call "being poor as fuck". i was about to join my first real hacker group. i had one cat, jack skellington (later he became my stepdads cat). i wouldn't have a blog for another 2yrs or so. but i did have an electronic journal i saved on old giant sized floppies. 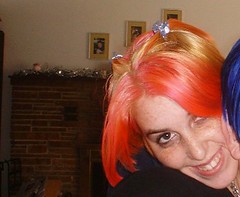 10 Years Ago (June 2001), :
we were definitely in sf by this point. evan was 6 and in school, zoe was 4, and zane was 2. i went to a lot of goth and industrial clubs. i had become seriously disillusioned with photography as a career at least once by this point and left it "forever" to work in computers. i was working as a programmer for the spam company, slangin those optins. if you ever got email from wired, victorias secret, any conde nast publication back in those days, chances are highly likely that i was the one that inboxed you. i also dabbled in writing for the shadier side, what can i say, the money is good. remember ms cleo? :D i would not be shooting a lot of protests until the next year because these were still the days before 9/11. roger and i had agreed to see other people and i was dating jawshie. things were still really good before his depression really overwhelmed everything. i used freebsd and was snotty about it. i was definitely on the real internet by this point, and i am pretty sure i had a webpage. definitely an sfgoth page. i also had a real computer by then. our hacker group insub was in full effect and i could hack a lot of things but until they make a statute of limitations for computer crimes i ain't sayin shit. we had two cats, awk and grep. p sure i went to defcon this year, or hope. i had an lj already, but those entries are EXTREMELY whiny and i do not subject the internet to them. ljdrama would be born later this year if i remember right. which i don't. 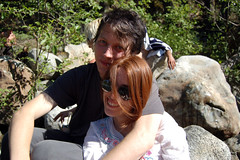 5 Years Ago (June 2006), :
evan was 11 and graduating 5th, zoe was 9 and had just made her first communion, and zane was 7 and getting super into art at school. yuriy and i had been dating and living together for a year. it was coming up on our anniversary. campathon was getting ready to happen (our giant friend camping trip that we go on every year. it is where yuriy and i got together, and where we mark our annv.) we had founded our new hacker group bantown, insub dissolved after SOMEONE (not me) got the entire network ddosed by latvia for 3 weeks. yes, the entire country. i used osx and was a tad snotty about it. i shot a couple protests, including the annv anti-war protest. i was working in fashion at the time and had just started. i was still very into the idea of shooting people for a living for forever, but had gotten totally burned out on editorial and children's photography. i swore i would never shoot another wedding or work for another wedding photog. we went to a lot of crazy giant parties, and hacker conventions. i believe we went to toorcon and defcon this year, and burningman. yuriy and i were doing a lot of traveling, to see his family fairly regularly, down the coast several times, and to his oldest younger sister's wedding. i could hack all of the things by now, but i quit using my powers for evil some years before. we had two cats, awk and grep. i backed down from my prolific ljing days by now. getting the time to post an entry was a lot harder. 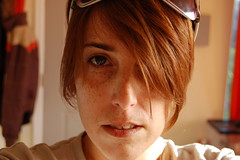 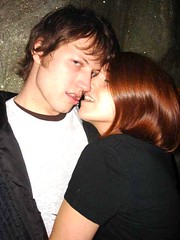 3 Years Ago (June 2008), :
evan was 13 and in middle school, zoe was 11 and graduating 5th grade, and zane was 9 and had just made her first communion. yuriy and i had been together three years. i was working shooting fashion at the time still (bebe, macy's, etc) and very unhappy. i was about to quit photography forever again, but i got to shoot the construction of the new bay bridge and i managed to parlay those images into several civic photography contracts. i had been out of computers for several years having gotten "rich" off spam. i still used osx but was no longer snotty about it. we were finally in our current house, altho it was still very disheveled and unorganized. we started raising chickens, and i was shooting a lot of color film. bantown was dead, but i officially killed it off later that year and started chatkrew, a new group for hackers to hang in but not hack. hard chatz only. our mountain caught fire 2x and burned right up to my driveway once. the last campathon happened this year iirc and i believe we went to toorcon this year too mebbe? we still went to a couple giant parties but not as many as previous years. we still three cats, awk, grep, and kalashnikov. we got a dog that xmas. i hardly ever ljed by now. i still read my flist in its entirety tho. 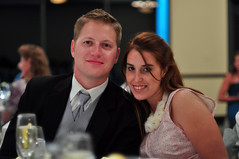 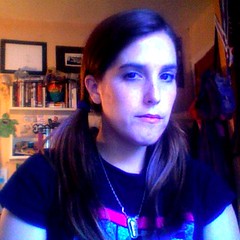 1 Year Ago (June 2010), :
evan was 14 and had just finished his first year of high school, zoe was 13 and had just performed in the play and met adam savage and zane was 11 and had just had her major scary surgery where she almost died. yuriy and i had been together 5 years. i was totally focused on zane's recovery. we did not go to campathon this summer, we mostly spend the summer around home doing things like fishing and fixing up the yard. i had quit shooting people for money and only shot bridges and trains by now. chatkrew was dead because dank wouldn't leave me alone on irc, and we had created anti but it was a big secret. i had quit hacking computers even for fun, and had a serious hate/hate relationship with all oses by this point, tho i still used osx begrudgingly. we went to a lot of county fairs this summer, and traveled for yuriy's youngest younger sister's wedding. i did not go to any hacker cons or giant parties. we had 5 cats, awk, grep, kalashnikov, beretta, and glock. i barely ljed this year. 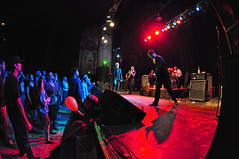 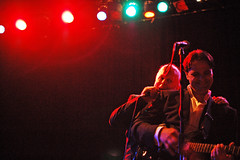 Yesterday, :
1. We spent the day with my high school best friend (and Evan's godmother!), her brother, and our family playing Apples to Apples and eating belgian waffles.
2. We recovered from the show we had seen the night before, one of my favorite local punk bands from 15yr ago played a reunion show.
3. For the first time in something like 10yr we don't march in pride and instead watch it on tv. not as fun, but definitely less glitter in awkward places the next day.
4. we have 6 cats by this point, awk, grep, kalashnikov, beretta, glock, and mauser, or as we like to refer to her, tiny tinaroney.
5. did not lj.

Today, :
1. Took the girls to work at the Zoo
2. Will clean my whole house from a weekend of company
3. Continue recovering from busy weekend
4. ljed 2x.

Tomorrow, :
1. Will begin 4th of July prep and garage sale prep
2. Will be taking the kids to the DeYoung Museum and the Legion of Honor with a stop at the Japanese Tea Garden to lunch.
3. Hopefully will have a somewhat clean house
4. will try to write post.

In a week,:
1. Will hopefully have 4th of July squared away.
2. Kids go to VBS Camp for a week
3. Start summer photography shooting schedule.
4. start regular every other day posting schedule.

In one month (July 2011),:
1. Will be in high prep mode for burningman
2. Will be organizing and throwing Zoe's best ever zoo birthday party
3. Will be planning my own Jesus Year (33) birthday party
4. remember to post to lj still more than 3x per month.

In one year (June 2012),:
1. Will be preparing for Evan's senior year (!!!) and starting to look at college options.
2. No Graduations this year!!! amazing
3. Will hopefully be planning our cross country trip with the kids and a friend's family.
4. firm blogging commitment re-established.

In five years (June 2016),
1. Evan and Zoe will have graduated high school, and Zane will be about to.
2. I am hoping Yuriy and I will have traveled to at least 3 places on our bucket list.
3. I will hopefully not have any more or less cats.
4. even more lj friends than now. <3 u all!

also, in honor of pride, let's go ahead and give this pic another round of love. <3

Showing your pride
What do you so strongly believe in that you would march in the streets to support, and why?
Reply 540

srsly people what HAVENT i marched in the street to support. for those playing along at home, i covered the march 2003 antiwar protests for several media orgs, was arrested twice despite having a legit press pass, and irced from jail because back then cops didn't know what "smartphones" were and let us all keep our phones. jail was fun, we played red rover. here is my favorite story from jail (the whole 3hr total that i was there): they gave us balony and cheese sammiches for lunch. the vegetarians were making a big fuss about no veg option, so some of the cops passing out sammiches pulled balony off a few for the veggies. then the vegans were like WHAT ABOUT VEGAN OPTION? (and this is sf, during an antiwar protest. there were a LOT of vegans) and so the cops pulled the balony AND cheese off a couple (leaving the mayo) and tossed them at the vegans. a dick move, but the look on the vegan faces was priceless. (and to be clear, this was just temp holding at pier 27. once people were processed they were either cited and released or sent downtown to real jail where vegan options are available. (this is sf) so it wasn't like they were starving people for their food choices, just making them a bit hungry) anyway, later we sued the city for millions for false arrest of press and gave the money to the aclu and national lawyers guild (for providing free legal to bail us all out). below is a pic of me with my sidekick in front of sf city hall, which i used to direct the online reporting arm of several media outlets, from the streets, during all of the coverage. all of you using smart phones and twitter and whatnot to direct protests and social activism movements? i invented that game bitches. represent. 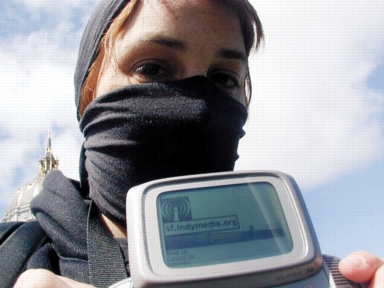