Smashing the Stack for Fun and Profit 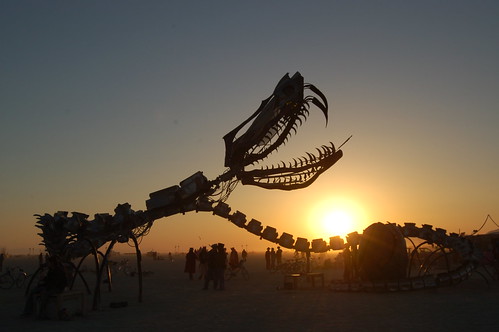 This is from my as yet mostly unsorted and edited shots from burningman.

I am at toorcon in San Diego until monday. It's been pretty hilarious so far. lj users weev and revmischa gave their talk yesterday and it was probably one of the funniest con talks I have seen in awhile. they took a relentless problackhat stance (duh) and showed off some new 0day like OH DANG WHAT YOU KNOW ABOUT FIREFOX JAVASCRIPT VULNS AND STACK OVERFLOW you can read the ensuing press drama here or here or here.

In other news from the most adorable Boots Riley of The Coup which is my favorite hiphop band ever (dead prez being second) and imo boots riley is the most awesome rhymer in the country:


"The Coup is nominated for "Best Hip-Hop Group Of The Year" with the BARS (Bay Area Rap Scene) Awards.

For those who don't know- This is a VERY big media event here in the Bay Area, which has a national impact because of all the current hype around here, and we need all the publicity we can get. I think it will be broadcast live on TV this year.

The voting is done on the internet, you do not have to be from the Bay Area to vote.
There is only one vote per category allowed per computer.
So if you're going to vote more than once it has to be from a different computer.

Please Vote Now. Soon it will be too late

Go to www.barsawards.com, hit "Vote", then hit "Secondary Awards", and vote for us. They have mispelled our name as "The Coupe", but don't let that stop you."

And if you dont know who the coup is, listen to this track RIGHT FUCKING NOW. Boots is the second verse rhymer. Srsly this is his sickest rhyme ever, its so badass: