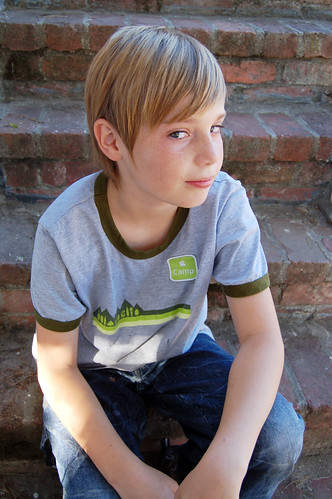 Evan's sense of humor is very kidlike. He doesn't really understand that there is an ironic or subcontext to a lot of things without elaborate explaination. Generally Evan is more drawn to typical kid cartoons as opposed to kids psuedoadult shows (typical kids cartoons are more about situations than relations. Whereas in cartoons the charactors generally stay fixed, with situations instead revolving around the characters. In the kids psuedoadult shows, its more about the character development and their responses to situations, ie how they grow as a character more than just how they get out of this episodes fiasco). He likes Invader Zim a lot. Evan likes to collect jokes as well, so if you know any good kids jokes, let me know. Evan isn't immature so much as not mature yet if that makes sense. He doesn't revel in being juvenile and shocking, he just isn't yet fully aware of other social worlds. Of the three he is the most kidlike, tho is is as of late, slowly starting to make the change, gaining new personality facets and new observational information since he started Jr. High. Evan rocks!