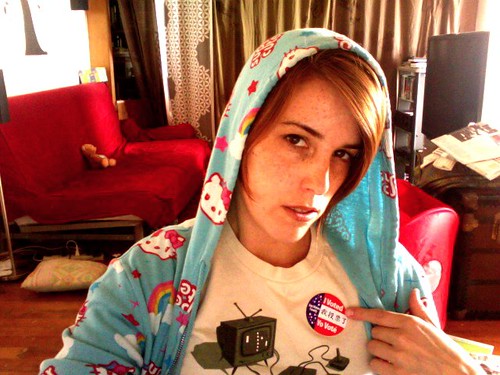 ¡yo voté!, originally uploaded by hep.

If you're a renter, or you might be one, or you know and like people who rent, you should vote against Proposition 98 next Tuesday, June 3.

gordonzola has done a fine job of explaining why at this post and previously at this other post. I'll summarize here with cut and paste bits from his post:

State Proposition 98 on the June 3 ballot will change your life and change our city forever if it passes. This dangerous measure would end all rent control in California. Worse, it would also end just-cause eviction protections. If it passes, landlords will be able to raise evict tenants for no reason other than that they want to raise the rent.

Besides attacking tenants and rent control, Prop 98 will also end a number of environmental regulations as well as zoning and land use laws. Under Prop 98, developers will be able to ignore height limits in residential neighborhoods, build on environmentally sensitive areas and bring chain stores into neighborhoods where they are now prohibited. Prop 98 will also end requirements that developers build a certain number of units which are affordable to people with low and moderate incomes.

Also likely to be ended by this language will be laws requiring landlords to give 60 day notices for large rent increases or no-fault evictions, as well as laws requiring relocation benefits for no-fault evictions. Laws limiting the amount of security deposits or limiting when a landlord can hold on to a security deposit will also end. Prop 98 is a constitutional amendment so its provisions will override all other local and state laws (and make challenging it in court especially difficult).


Please vote. Without a good showing it's likely to pass, because they put it in a boring election between two important ones.