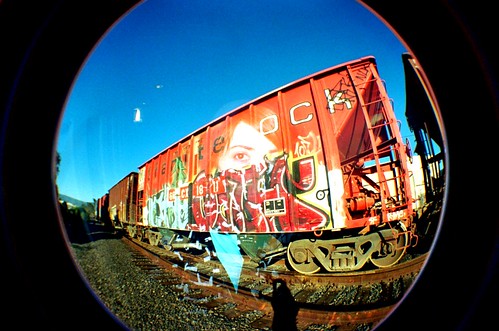 this is a double exposure of me on a train. people are bugging me about the image stats since, this being film, there is no decent exif data. so I am going to append notes as best i can from my illegible scribbling in my shootbook. double exposed: 1st exposure being daylight 1/100th @ f8, 2nd exposure being an indoor (in a tunnel) longexposure of about 1.5" @ f8 to saturate the color in and then firing off the flash before the shutter closed for detail. anyone know a way of adding after the fact shot exif data to an image from a film scanner? without a lot of tedious field fillin work, most of the settings are identical. i do not want to edit shot by shot i have a ton of film images. plz advz <3