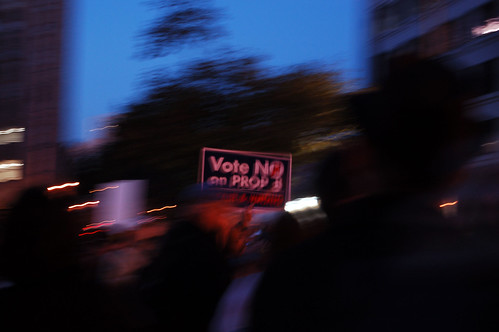 no on prop 8, originally uploaded by hep.

from the rally the other night. i only shot about 10pictures because i was carrying a sign. plus these days i get tired of dodging thru crowds and almost getting knocked down constantly to get decent shots. let younger taller kids shoot.

and lest we all take our democracy for granted your communist and population scale issues link of the day. from

For all those out there blaming one race or another for the passing of prop 8: please see this and this. I find it incredibly ironic that just as we are patting ourselves on the back about how this election has broken down racial barriers we are right back to using race to throw around blame. So, if we wanna get racist I am jumping in: prop 8 passing was the fault of white people. There I said it. Not just white people voting for it, but all of you complacent white people that thought donating $5 was enough to salve your white guilt about your lack of political contributions. So quit whining on the internet and trying to find someone to blame (and in the process further reducing support for your cause by those people of color who stepped up to vote no on prop 8 regardless of whatever their personal beliefs about homosexuality are) and start trying to figure out something you can do to effect real change for the cause you say you believe in (but are busy attempting to destroy all credibility of). To those who aren't spreading around racial accusations based on some stupid exit poll (hello WHEN will we learn to QUIT BELIEVING IN EXIT POLLS AS FACT), thank you for being the voice of reason in this climate of ridiculousness.

scottrossi for finding these for me. the answer isn't blaming race or even blaming anyone for it passing. the answer is to work harder and more compassionately so that next time it WILL pass because we have shown that gays are fine upstanding people who deserve equal rights just like everyone else.
Subscribe