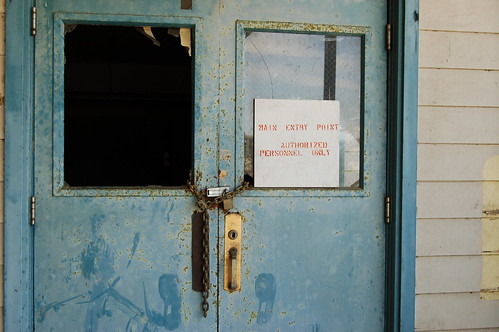 People keep asking what Mare Island is so I figured I would explain it in another jpg post. Mare Island was the first Pacific Naval Shipyard by the US Navy built in 1854. Mare Island itself is this weird little piece of land in the sloughs of the Napa River Delta and the SF Bay that got seperated from the mainland. The City of Vallejo is just across the River, but Mare Island is a mostly stable landmass of its own. In 1996 they finally fully decommissioned the base and mothballed the remaining fleet there. Many buildings are deemed historical landmarks and cannot be demolished. However there is also no money anywhere to fully restore them so they sit in mostly abandoned splendor.

There also used to be huge tracts of former officer and enlistment housing that have been taken over and restored back into normal public housing over the past ten years. Within the next five I believe all the housing will be fully converted back into livable quarters and handed over to white yuppies who are too scared of Vallejo proper. So I plan on heading out there a few more times to archive all this great urban decay before it's gone.

Anyway, walking around alone out there for 3-4 hrs is pretty fkn creepy. The wind is never ceasing thru the sloughs and when it hits the houses and buildings full of mostly broken windows it starts to sing. Shades and blinds hanging in those windows swing back and forth, doors creak, chains clank, screens hiss, the old buildings are full of sounds. The only thing that would fully creep me out was when eventually a feral cat would come running out of some empty building because I would be all OK WHAT DID IT SEE THAT I MISSED, WHAT SCARED IT OUT?!??! I also had a little friend in this crow that basically followed me around all day cawing at me. He would perch on every building I was scouting and just give his caw caw caw commentary. If I spoke fluent crowese I am sure he was giving great advice.