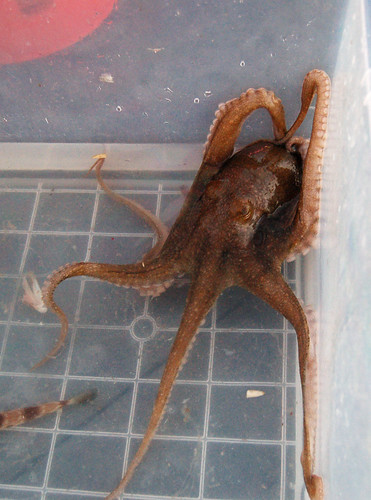 while we were at the balboa pier down south (oh, did i forget to mention we went to socal to spend a very russian kthxgiving with yuriy's family? that would be why i haven't been posting. sry lj!) we spent some time fishing, because that is what immigrants of all kinds do when they come to the us, find the nearest salt water pier and get down to some serious fishing. and these guys are serious, backpacks that turn into camp chairs, packets with hand sanitizer and latex gloves, these guys make pro fishermen look like amateur hour at the ok corral. someone caught this octopus and let it swim around in a box for awhile, and as a cephalopod fanatic i was obsessed with shooting 9000x shots of it. the water is deeper than it looks, but it liked to rear its head out and take a look around. it was actually very clever, it was very obviously using its tentacles to probe and measure where the walls of the bin were. i have the feeling within an hour it would make its first escape attempt.