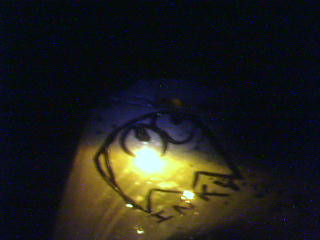 i am sure we are all well aware of google's pacman love today. in honor of my second favorite video game containing my favorite video game character, inky, i thought i would post a bunch of stuff that i have tagged with pacman on flickr. first is a pic one of my favorite shirts, recognizable as my icon because inky personifies me ok, dont judge me, given to me not once, but TWICE by friends who obviously love me and know me well.

nullcherri both found this shirt and got it for me. 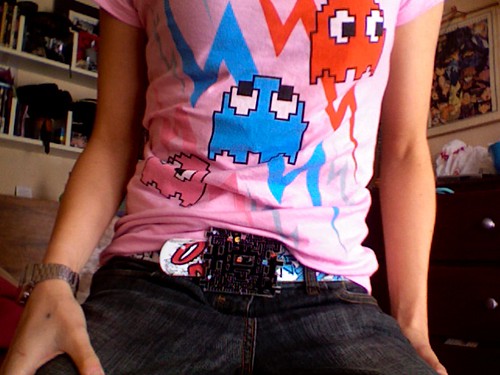 then there is one of my favorite xmas gifts of all time, also given to me by renee and jason. renee knows me so well, my main criteria for pacman purchases is that inky be prominently displayed or themed. i love the rest of the ghosts as well, and of course pacman, but inky is my favorite ghost <3 i like the coloring best on inky, and i love how his eyes look more shifty than the other ghosts for which whom blue contrasts more heavily (so to me they look more clownish). inky was straight up shady and would stab you no joke. 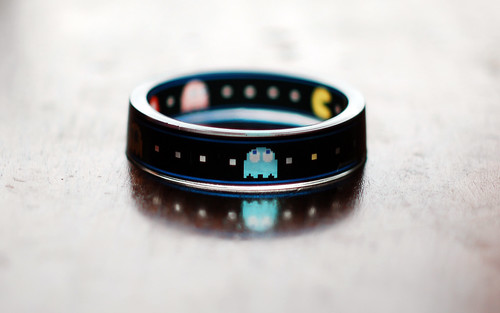 i think some of my favorite memories of pacman involve dumping quarters in at bars. i played a LOT of pacman as a kid, often in the pizza parlor right here in town. but when i was older was when i really got into it. since i don't drink, but am surrounded by alkies, i spend a lot of time bored in bars which are not very interesting places if you are not inebriated. so i tend to force my friends to gravitate towards bars with old game machines, particularly tabletops. often the machines are somewhat handicapped by the detritus of endless spills from tipsy patrons toasting their high score, but many are still in decent condition and with 4 quarters i can have at least an hour's entertainment. the one thing i dislike about playing in bars tho is that people get interested in what you are doing, and invariably some macho guy has to try and beat my current high score, which leads to him monopolizing the machine that i would have had free rein over if not for his drunken fixation. and of course, the drunker someone is the worse their reflexes are, so after i am finally warmed up i am often treated to endless rounds of "no let me just try one more, i swear i used to be good!". 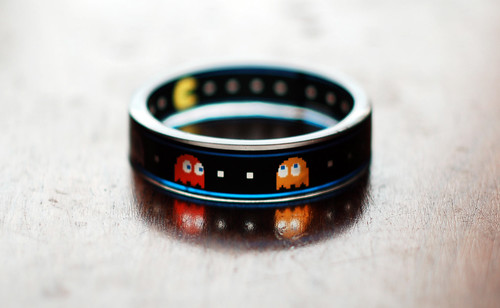 i have two pacman bags. one i bought randomly in chinatown because not only was it pacman themed with inky displayed, but also the pattern is AMAZING. the little fruits are so cute and they remind me to snack on fruit when i use it. i put a little keychain that renee got me of just inky on it for extra inky points. the other all black one was given to me for xmas by

cryptomail. he has such awesome taste. 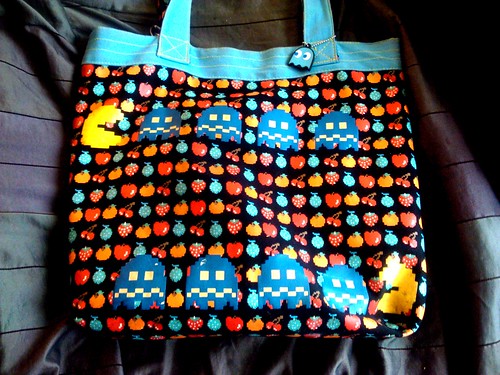 i mostly use these bags for toting stuff back and forth to the various schools. i used to be super anti-totebag, mostly because for work i always have messenger bags and camera bags, but i often have to carry folders of papers and small items to the schools when i volunteer. i have found tote bags to be super useful for these kinds of portage. tote bags are such a mom thing, there is this certain mom stuff that you have to do all the time, and tote bags fit that bag need perfectly. sometimes i use them as a quicky camera bag too when i don't want to carry a full kit bag. then i just wrap my camera in a cloth and throw it in the bottom. 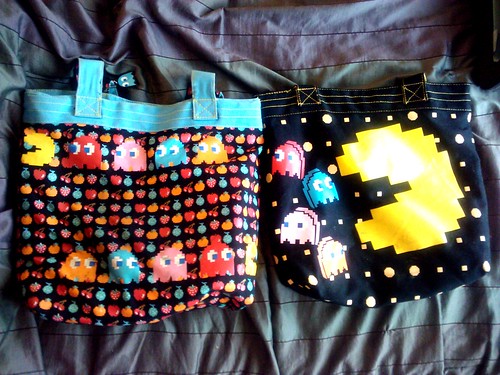 close up of pacman belt buckle. pacman is about to die :( 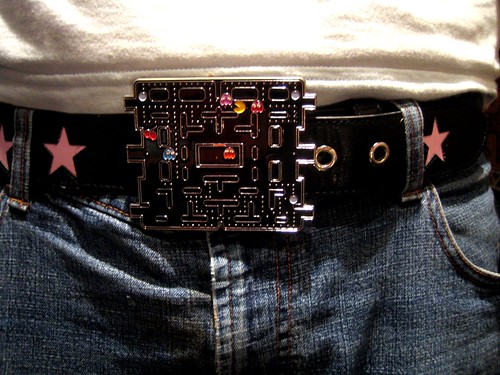 pacman graffiti. there is a tagger around town that tags one of the ghosts EVERYWHERE. i want to meet him and hug him. i am pretty sure he tags inky specifically because sometimes he writes inky underneath a la the image on the top (which i believe we found inside the abandoned public health hospital) 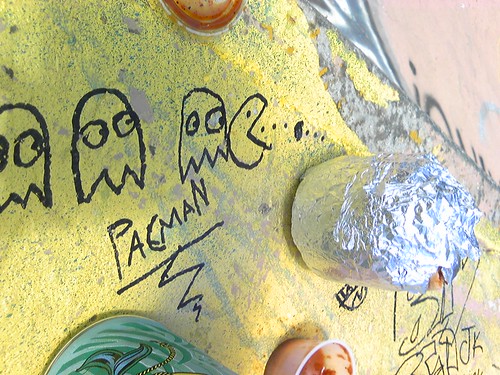 what is your favorite video game or video game character? what was your high score on the google pacman game so far? who has rolled it?