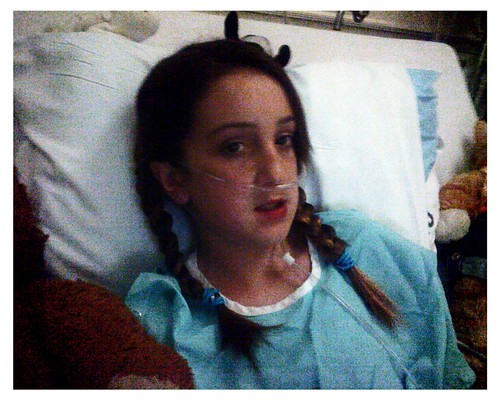 you are going to get this update 2x, sorry flist. I meant to hit the body
field and instead hit send because apparently I cannot use finger.

zane is doing MUCH better. there was a time yesterday afternoon when we were
very worried as she was starting to lose all the progress she had made on
the tube and was desatting slowly. there was also a period of low morale
last night when she became discouraged and frustrated with how slow things
are going and the fact the she might have to be in here for several more
days. also she is so OVER the taste of codeine syrup (luckily her only oral
med). she is enjoying unlimited popsicles, but reached the point last night
where she just wanted some real food. yogurt, applesauce, jello, etc were no
longer tricking her stomach into believing it is full. however once we got
past that point she has been rapidly improving. her lung capacity has gone
up during the night, and her blood oxy saturation slowly climbed back into
good range so the danger of needing to reintubate appears to have past. now
we just need to slowly wean her off the last small percentage of oxygen, but
unfortunately it can take awhile even up to several days many times.

also thank god for univision because world cup fever appears to have
bypassed this hospital and I would have cried irl if I couldn't watch brazil
v. portugal.