zane on her ds in the children's ward.

zane on her ds in the children's ward., originally uploaded by hep.

update! so i tried to write this out at least once already, but my computer ated it by spontaneously rebooting on me. i guess it did not like what i had to say. so i am going to try and rewrite. at the end of june zane was scheduled for an outpatient tonsillectomy, adenoidectomy, and tubes in the ears. the day before the surgery i was a wreck, i fully had at least 4 distinct panic attacks. i kept feeling the same as i did before several other outpatient surgeries in my family that went wrong, sometimes we joke that sometime back in the family line we pissed off hypoxia, goddess of complications under general anesthesia. yuriy couldn't understand why i was so stressed out or upset, but i was panicky trying to figure out if this was all in my head or if i really was feeling super paranoid for a reason. to that end, i scheduled one more appt right before the surgery with her anesthesiologist to go over the family history again and talk over my concerns. i fully believe now that not only was my paranoia justified, but the reason zane did not die after the surgery. right after they pulled her surgical airway tube, she developed post-obstructive pulmonary edema from laryngospasm probably from an anesthetic sensitivity. the anesthesiologist sat with her for longer after the surgery waiting to wake up, and he was able to immediately notice when she began foaming up and was unable to breathe. from what i have read, many pediatric patients who develop this don't get caught as soon and it can lead to cardiac arrest (and heart problems are well-known in our family). in fact, i was worried because the entire time she was in the hospital her resting heart rate hovered around 130 and never dropped below 100. 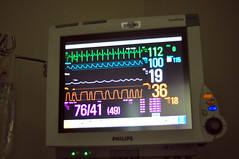 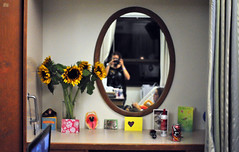 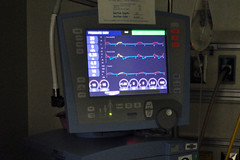 so she was rushed from the out-patient surgical center, up into the city to a pediatric hospital over in the inner richmond where we camped out for the next week. the hospital was really great, it was very warm, inviting, there were lots of distractions and things set up to help relieve the kids from the fact that they were in a hospital. even the picu was relatively quiet and free from distractions aside from nurses coming in to monitor vitals. we were there for about three days until zane was able to be fully off the respirator and the nose canula oxygen, and until her nighttime blood oxygen sats were above low-90s. once that happened we spent a few more days on the normal children's ward while she got better. it was great up there, they have movie lending libraries, lots of aides to entertain kids. we spent a lot of time in the ward playroom where they had a pool table, GIANT tv, and tons of toys and playhouses. we played a lot of operation and other games, colored, watched the world cup, cheered, had a midnight pizza party with mushed up pizza once zane was cleared to try solid foods. it was a very positive hospital experience for all that it was having to stay in a hospital. hospital time is so weird because it feels like time stops, and the world keeps going but you step outside it for awhile. eventually we were cleared to go home, and had the fastest discharge in history (seriously like 5mins) so we could get home for the home medical supply people to deliver zane's home compressor and oxygen cart. she will have to be on oxygen at night for a few more months until all the post-surgery swelling and remodeling is done so we can have another sleep study done. hopefully then she will be all healed and we can forget about this whole thing.

so the following two weeks were spent heavily recuperating and helping zane get better. i knew there would be recovery time needed, so it was only a little longer than i had planned. we also were able to do some fun stuff in there with making art, working on learning projects, etc. it took zane quite awhile to get back even up to the point where she could take a walk on the beach. she is doing much better now however, almost totally back to normal. she is even cleared for swimming, just in time for the children to all go to mexico to visit our family (we moved this year's trip to the end of summer so she would be able to enjoy it, and thank god. my mother in law was pushing for it to go on as normal and to just push her surgery to later in the summer ("it's just an outpatient, she will be fine!") and thank god i listened to my intuition and did things the way i thought was smart. i would have hated for her to miss the beginning of her 6th grade year! this is the first year that school really starts to count! 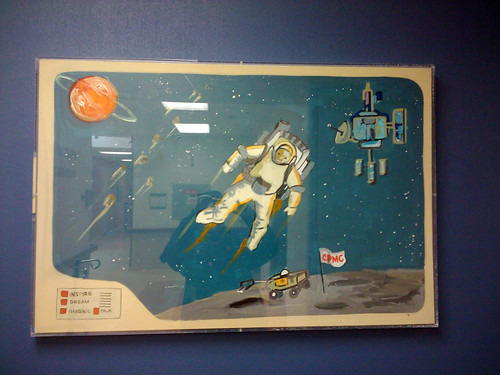 for those who are worried that i was exploiting zane by taking pics of her in the hospital, etc, she asked me to do so so she would know what was going on. we all take so many pictures because we use them as reference, probably from having me, a photographer, as a parent. but we like having a visual record to refer to, and to kind of put things together in our heads as to what is going on sometimes. and if you don't have a mirror handy, a picture and lcd display make an awesome substitute.
Tags: irl, medical, zane
Subscribe
Previous
← Ctrl ← Alt
Next
Ctrl → Alt →
Previous
← Ctrl ← Alt
Next
Ctrl → Alt →