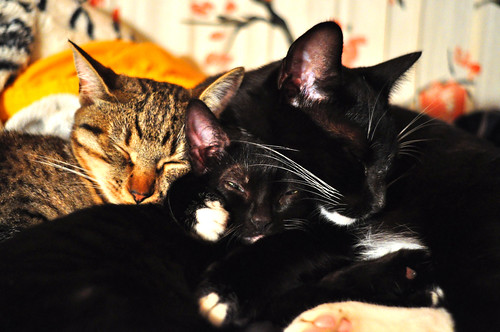 so the story of the rescued kitten which i haven't had time to tell. one night a couple days ago zane came in and said she heard a kitten crying in the bushes near our house. we went outside and found this tiny (like maybe 2lb) kitten running around crying in hunger. we spent about 30-40 mins trying to trap her with variations of me, zoe, zane, and my mother corralling her, but she kept escaping and running back into the bushes. it was dark at the time, and the various predators, skunks, raccoons, coyotes, were out in full force. one skunk was trying to stalk her down in the bushes, but was scared off by us moving around.

however, raccoons aren't scared of humans at all. two raccoons zeroed in on her cries and started moving in to take her. we were starting to get frantic because i knew if the raccoons caught her they would race off and it would all be over. once they made it back to the wilds of the mountains there was no way we could follow them through the overgrown scotch broom and other brush. we finally mananged to lure her out close to us, about 2ft away, but the raccoons were closing in. she was super scared, but so hungry she was willing to trust us.

but at that moment the raccoons came up behind her in the bushes and grabbed her. i was looking directly into the lead raccoons eyes. the bushes forced them single file or i believe this story would have ended a lot differently. the rear raccoon couldn't see what was going on, and the lead raccoon couldn't back away or leave from that direction. he would have to go past us AND hold on to the kitten. the kitten wasn't having any of it, and bit him super hard, which caused the raccoon to loosen its grip. the kitten squirmed out of its grasp, and ran directly into my lap. however the kitten was overwhelmed with fear at that point, and bit me and zane, also scratching wildly, as we attempted to grab her and wrap her in a sweatshirt. so we just bundled her up and ran inside. she spent that evening hiding in the closet, but since then has totally opened up and now tumbles all over everyone's lap and the house.

she seems super socialized so i don't believe she was a feral. also there was never a sign of other kittens or a mother around. some animal took a piece out of her above her eye, she has what appears to be teeth marks over one eye, but it is healing well and the scabbing has now come off (claw marks are considerable thinner and close up relatively fast. this is usually why cats get abscesses, the skin closes over the claw cut, leaving infection to fester and grow underneath. you can see above her eye in the image where the teeth mark scars are) she is probably between 4 and 5 weeks old, able to amble around, but still very wobbly and needing a lot of sleep, etc. a couple days of feeding have fattened her up. we named her mauser for now, i believe once we fully socialize her and raise her enough to spend days alone she will be going to live with my mom. i wasn't looking for another kitten right now, that's for sure, however i can't exactly be all "look kids! this is a life lesson! survival of the fittest!!!" when this shit happens on my doorstep. well, not without ending up in therapy with them in a few years. the other cats have all taken her under their paws, and have formed a happy little cat family. how was your week flist?