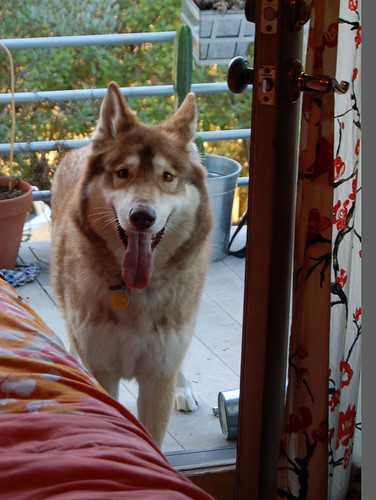 yesterday i was walking my dog on the fire road that borders our property (and one of our cats was walking with us, tho not on a leash. our cats and dog are friends.) when a gigantic pitbull came barreling down the mountain and grabbed zorya's face and throat and started savaging her. luckily for her she is a giant malamute with a super thick furry ruff, AND she is shedding out her summer coat and growing in a 2x as thick winter coat, AND she has an extremely thick leather collar, so she was mostly ok. she has some puncture wounds and lots of hair ripped out. it took 20mins to pry the other dog off her with both me and the other dog's owner (who had let her dog run offleash because she didn't see anyone around) holding both of them and trying to lever his jaw open with a variety of sticks, ropes, etc. luckily she took the brunt of the damage and the cat took off and was able to hide. it took me quite a bit of time later to convince him to come out of the bush and go home. all of this happened about 20ft from our front door.

i haven't been taking zorya to the dog park for awhile because other dogs always insist on attacking her (which causes her great sadness) often running from the other side of the park to where she is alone (on leash) specifically and with the sole intention of fighting her. now i am worried about even having her in the yard. this is the 3rd time in six months that she or another animal has been attacked by offleash dogs in our yard. i am also never leaving my house without my phone again. i actually walked up to the front door with her on the leash with the intention of getting it, but i didn't want to upset grep who is still convalescing on the couch from her surgery on her kitty abscess. zorya won't attack the cats, but she will try to sniff all over them which would offend grep's delicate sensibilities. so i turned around and did not get it. NEVER AGAIN.

then our internet was out for 24hrs. so what did i miss flist? plz catch me up.