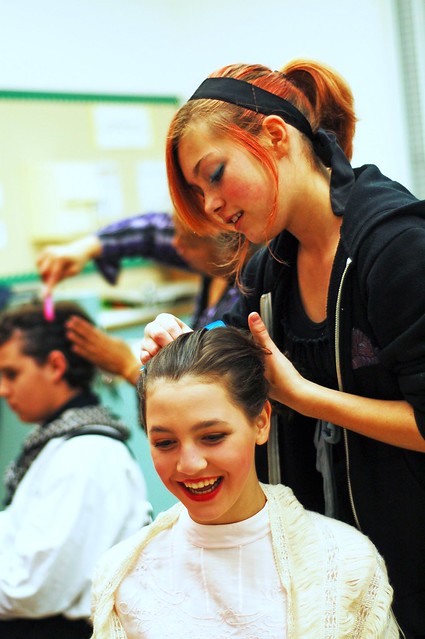 here is a shot of zoe doing her bff camille's hair before last night's performance. if anyone asks where i am over the next week or so we have a couple more performances left of this year's middle school production of "my fair lady". as i am slated for hair, makeup, show photography, & character portraits, and zoe is on for hair, makeup, and showtime stagecrew, and zane is in the choir (as well as doing hair and makeup for the choir) we are all a little busy. this isn't even mentioning the 48 cupcakes we need to bring each night. this year is pretty fun, even tho my fair lady is a little long and not necessarily middle school fare, the kids are really throwing a lot into their performances. there is a LOT of dialogue to remember even tho they cut a lot of scenes down, and the entire production clocks in at over 2.5hr just running the show. this doesn't bring into account the 2 hours of hair, makeup, and warmups beforehand, let alone striking the set afterwards because the middle school gym is used for all sorts of stuff. so we aren't walking in until after 11 every night we do a show. 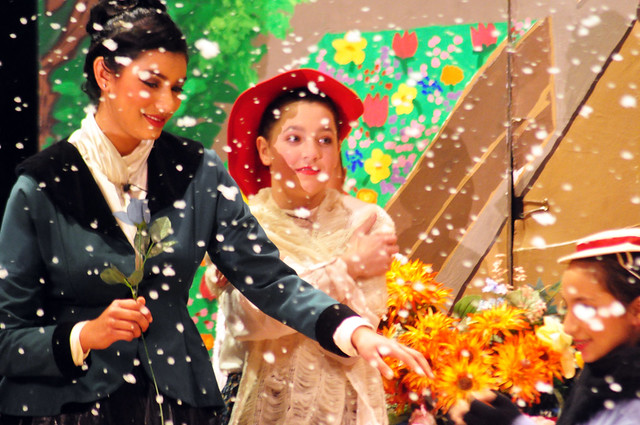 if you need me i recommend checking under the giant mountain of costumes i have to run back over to the school in a minute to reorg for tomorrow night. last night's performance was a huge success, including the snow machine for the last flower market scene! in the above shot eliza (zoe's other bff kryssia) accepts a flower from one of the flower market girls (played by zoe's OTHER bff amane. srsly this year her whole little social group was in the play in mostly lead roles. it was adorable. zoe is like me tho, she prefers to do the backstage work because it's more fun) in the snow near the end scene of the play.