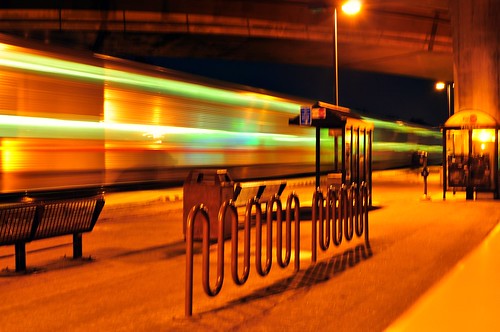 this image is terrible because i didn't use a tripod and i don't like the location i shot from. but whatevs. i think i will shoot it wide angle when i go back for real so i can get closer and in front of the bikeracks/shelter. <3 you caltrain.

this week should have been less busy than most. i have been working on catching up on a lot of tasks that got way-sided while i did the play, etc. however, evan is AGAIN home sick, i got two new work projects dropped on me, and i still have 90% of the over 1000 images i shot for the play to go through and edit (and it's not just the play itself that was shot. i also shot real backdropped portraits of every character in the play, shot 2hr before each performance of the makeup, hair, and prep, and shot the cast party. so at least it's not all the same image, but still it's gonna take me a few hours to narrow that many down into a cohesive collection and burn discs)

also today when i went to pick evan up from school a teacher told me to go to class or i would get detention, and then i had to show my id to prove i was his mom. (not to prove that i was on the pickup authorization list, that i wouldn't mind. but to literally show that i was old enough to be his mom. we don't even have the same last name so it's not like she was checking that either. i mean, i get it, but it's still annoying you know?).

i have to shoot all day today, tomorrow i have meetings all morning for the city bike coalition stuff, and then again i have to shoot real quick between 11 and 1, and then hopefully the water heater guy will come figure out why more water is coming out the bottom of our water heater than the pipes. it has literally flooded the laundry room and the dog is most unhappy about it since that is where her crate is. we made her a temporary nest on top of a table down there so she is dry at least, but this is totally not an ideal solution and i would rather not have to put boots on and wade over to the washer to change the laundry.

hopefully after that i can hit my glide shift then this weekend is evan's bday party (only 6 teenagers for an all-night game fest, but i still have to make the cake. luckily they are down with costco pizza because i dunno if i can handle making a bunch of pizzas too) and to top all of this off i have had a kidney stone wailing away at my ureter tubes all night long. for now it has throttled back to a dull roar of pain, but most of last night was spent trying to sleep through dreams and feelings of being cut open. uff. my life is so boring. people ask me why i rarely post this kind of bullshit, this is why. it's just an endless to do list occasionally punctuated by interesting photos. hope you are all having a less busy week!