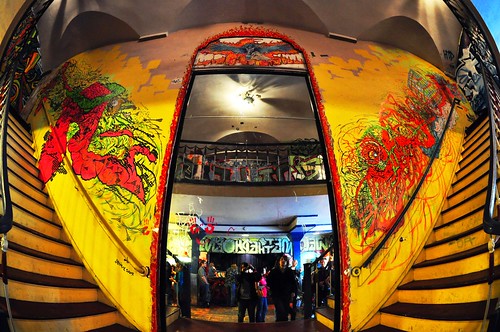 phoenix theatre staircase, a photo by hep on Flickr.

2 nights ago i was cleaning out the washing machine gasket to fix a door jam, and i unceremoniously cut open 2 of my fingers and my thumb on a broken shot glass that had somehow made its way in. (to be clear, there is no way i put the shot glass in because i sort laundry religiously. however i share a washer with three bachelors, two teenagers, and a tween so who knows who did it). i wrenched a finger pulling it out, and wheeling around in terror because one of the fingers was sliced almost in half at the tip, and the other was so deep i was worried i severed a tendon, i managed to trip over the dog who was trying to "help" and ended up kicking the doorjamb on accident as hard as i could resulting in a broken toe. final tally: 7 stitches, a broken toe, and possible broken finger (i will find out more today). added to this, that same night yuriy's grandmother passed away so not only will i be out of typing commission, but we are leaving town in twenty mins anyway for the funeral down in orange county. i will be out of town until sunday at the earliest. plz excuse the radio silence, and know that i am still reading all of you while we are gone <3