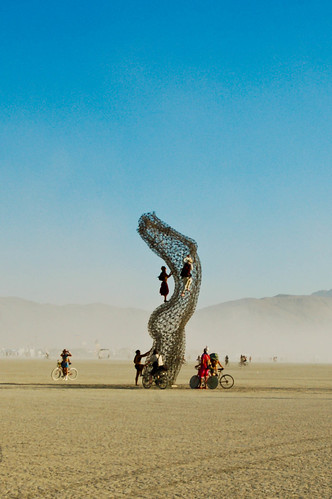 lots of people go to burningman for many different reasons, the parties, the girls, the guys, the drugs, the community, the sense of belonging, etc. i go for the art. and the ability to laugh at endless displays of white privilege, but mostly the art. unfortunately, as in any city of significant size (and black rock city, despite not being a census countable city due to it's impermeability, is still the 10th largest city in nevada during the event.) there is far far too much stuff to be seen and experienced in a week. 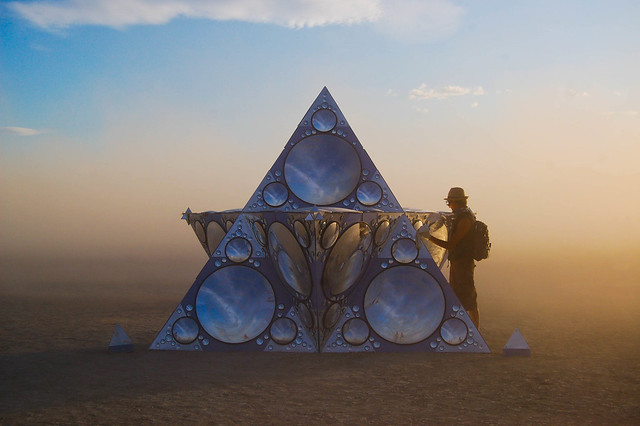 my own personal favorite places of brc to explore are the open playa (the area surrounding the man) and the deep playa (the area around 12oclock on the brc map, past the temple, out near the trash fence). some of the best art you will ever see is located in these sometimes lonely empty places. usually we would venture out in the late afternoon, hoping to avoid the heat of the day in areas where shady areas can be few and far between. 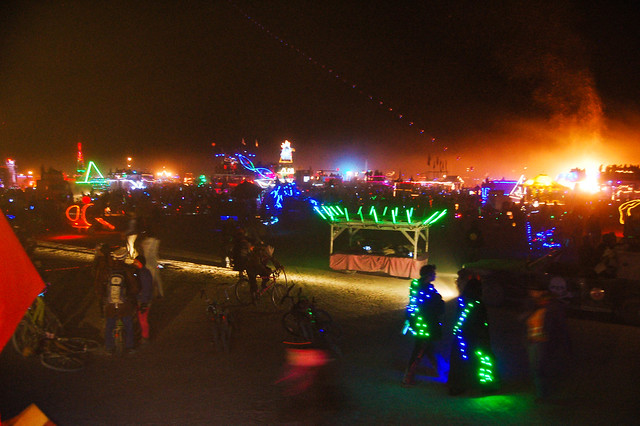 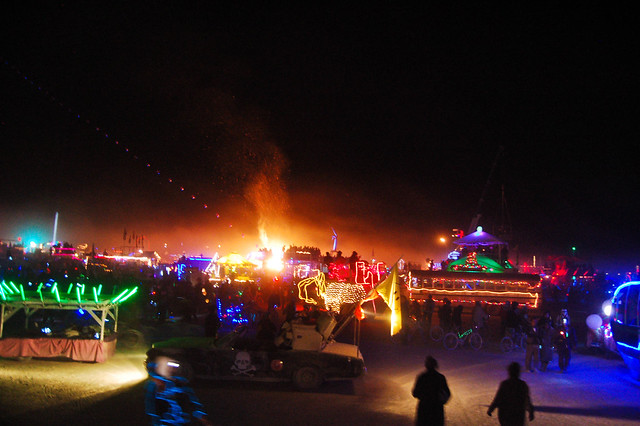 once night falls the open playa becomes a completely different place. glowsticks bloom in the darkness. fireworks crackle on the horizon. art cars go careening by dressed in fairy lights, el-wire, and elaborate sound systems pumping out the music of the hour (too often dubstep, sadface). and the art on the playa also sparkles forth, strung with elaborate displays which are viewable from miles away on the playa. soon the whole area around you is a jumble of blinking and pulsing basslines, and you cannot remember the look of the open empty playa by day. 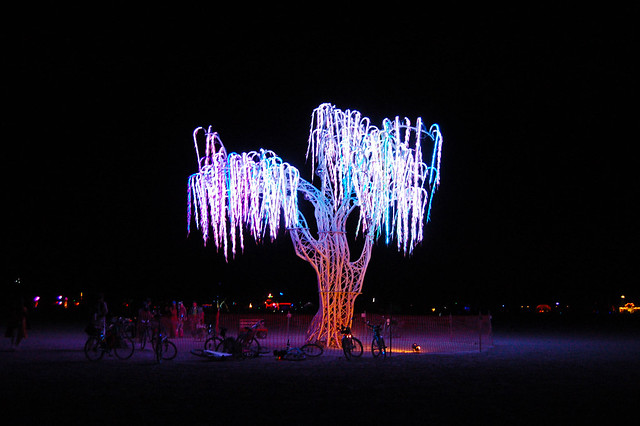 this light tree in the open playa was amazing. long ropes of glow lights hung down, changing colors and pulsating to what was going on around it. 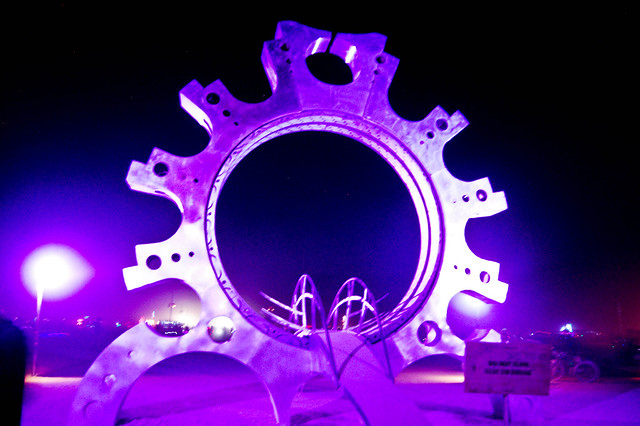 this was the portal from centercamp to the open playa. every night we wandered through it to start our journey towards whatever adventures awaited us on a night of exploration. parties, raves, elaborate fancy dinner parties in the middle of the playa, every adventure starts at this gate. 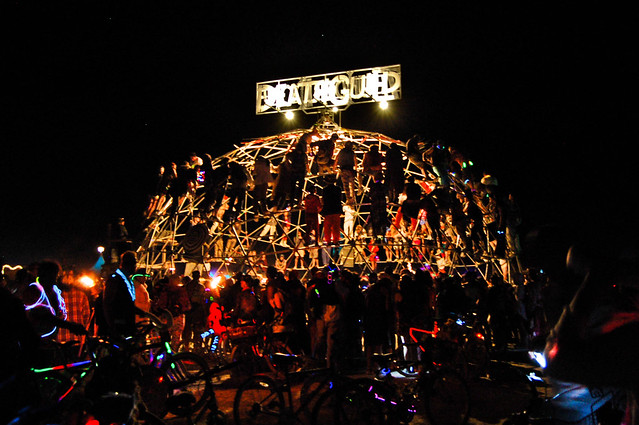 an on-going joke i have is that every time i go to thunderdome to watch a fight there are elaborate technical difficulties which prevent me from being able to watch before being dragged off to other adventures by my erstwhile companions. this year was no different. in my many many times at burningman, and my many many stops at DG thunderdome, i have only seen fighting a handful of times (literally a handful as i can count them on one hand.). so, sorry friends who fought in the dome and wanted me to watch. instead we were riding the dragon, or storming the castle, or any other number of late night playa escapades. 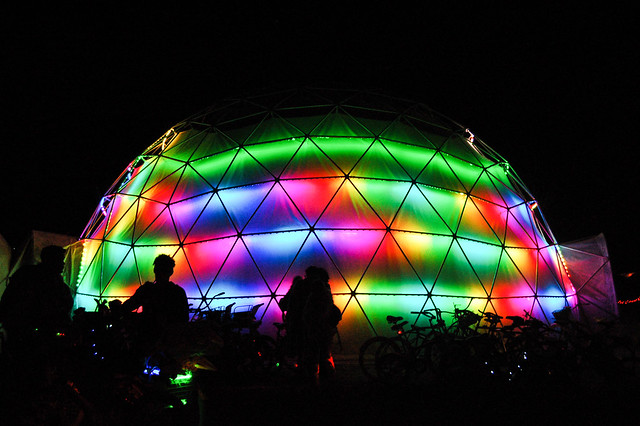 one of the most fun things about burningman is that around every corner is another fabulous dome, often playing music that is at least pleasing if not your favorite song (no dubstep please. and you will note that in all my years at bm i have only heard tupac *once* when it wasn't me playing it. next year dj friends i demand an oakland hiphop night in my honor.) since domes are so ubiquitous, people really go all out to decorate them, or otherwise differentiate them from each other, using elaborate projection systems and with laser light effects incorporated. 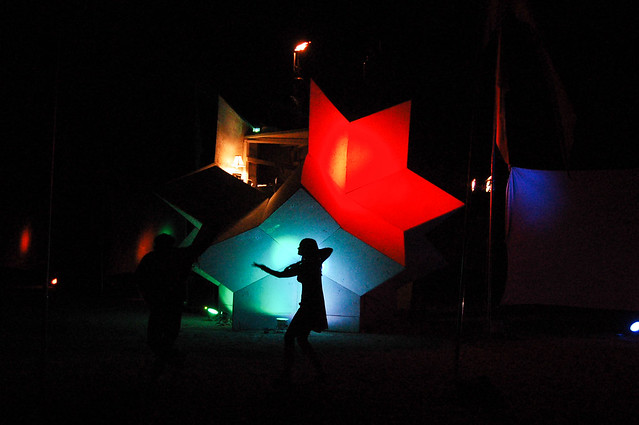 so many random pieces of art have awesome sound incorporated as well, so that you can stop by some amazing creation in the middle of the deep playa and end up dancing for hours to an audience of you. some of the best parties i have been to were me and 5 friends in the middle of an empty playa, with only the light of whatever piece of art we had found to illuminate things. 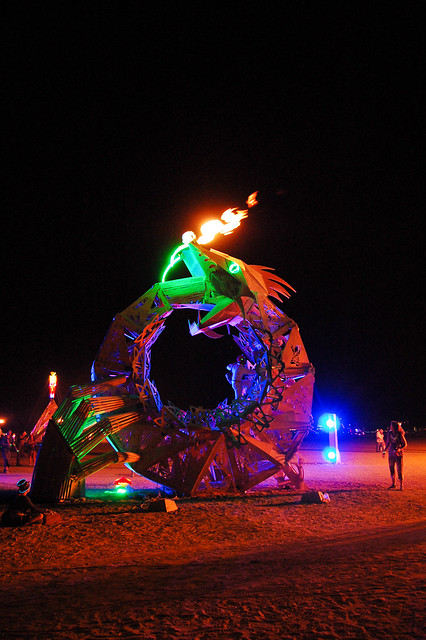 this amazing metal ouroboros sculpture was crafted by a collective of central texas burners, of which our own beloved

cavorite belongs to: http://www.flipsidecoreproject.com/ it was honestly an amazing sculpture. it blew fires out of its nose, and had a beautiful lighting effect that is not adequately captured in this image at all. i admit, i totally had trollspiration, and if i had had the supplies and time, would have added a second giant hand on the other side of the ring, and the tell tale ring of one of our beloved internet iconic images (dont click that link). dont lie, most of you saw it too. 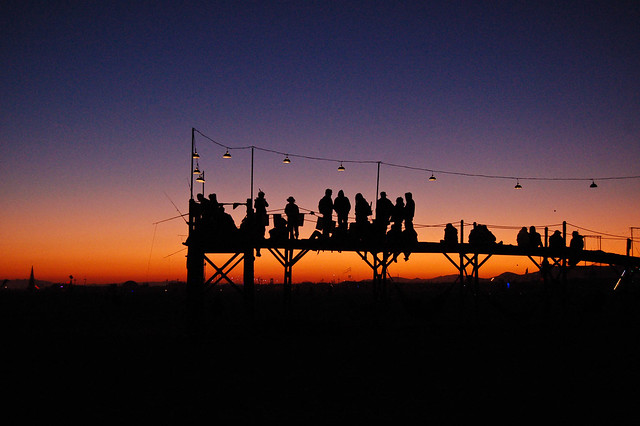 so what was my favorite art installation out there? hands down: the pier. a giant, rising, 200ft long pier made out of real wooden pier planks, and incorporating speakers underneath that wafted the sounds of ocean birds, swishing waves, and other assorted seaside sounds that if you have lived next to an ocean your entire life, will cause untold heartache and homesickness if absent from your daily goings-on. every day we spent hours on the pier, fishing with blinkie lights for passing ravers, chatting with the overly drugged up bar staff, lounging in the tiny rowboats that were docked at the pier. the pier also doubled as an actual pier for which to load on to the giant art ships that roamed the playa. 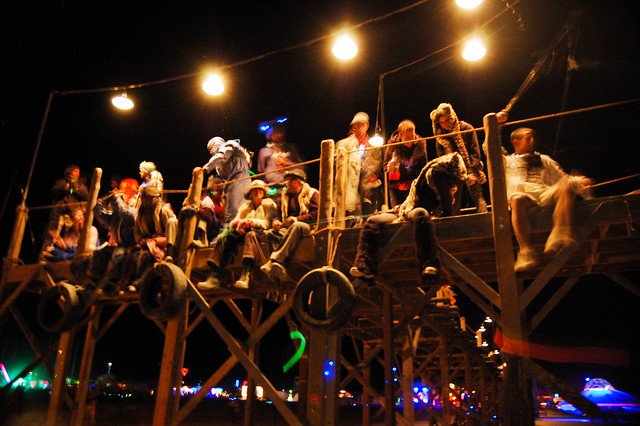 in our previous years at burningman we would play the "trolling for ravers" game quite often. "trolling" in fishing terms means slowly moving your boat across a body of water with a fishing pole trailing behind you. its an easy way of moving your bait without having to keep casting over and over (and potentially risking your bait flying off because either it got too soft and disintegrated, or the line you tied it onto the hook with weakened from repeated casts). so we would have fishing poles with glowsticks on the end, and entice ravers to run after our art car hoping for a free ride across the playa. so it took my favorite game to a fun new level, as schools of ravers shoaled around the legs of the pier fighting over whatever raver trinket we had attached to the line at the time.