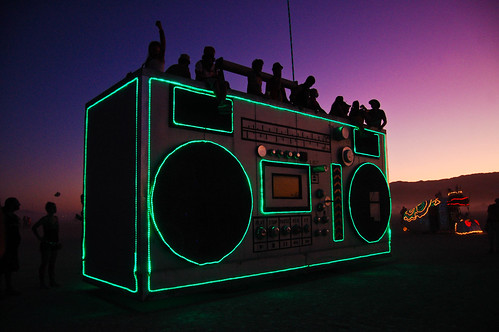 boombox art car, a photo by hep on Flickr.

and now for my second favorite part of burningman: the art cars. nothing is more fun, and there is no more fun way to experience the open playa than roving across it in a tricked out art car with a band of your merry companions. the bulk of the 1500+ images i shot were of various art cars in various states of use, from the completely empty stowed away for the day car, to the fully lit ready to party the evening away car. i could post all day on all the cool cars we saw this year, but i will keep this to a (somewhat) brief highlights reel of some of my favs. 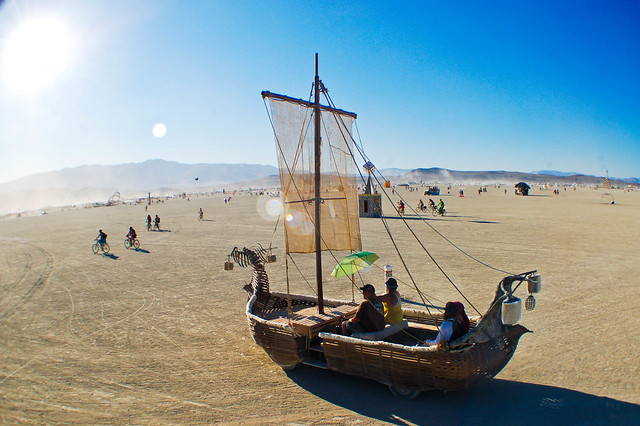 i am fond of wheeled ships of all kinds. i think the idea is funny. this viking ship was pretty amazing, it was even very quiet when it drove so it felt very shiplike. they would constantly buzz the pier during the afternoons. 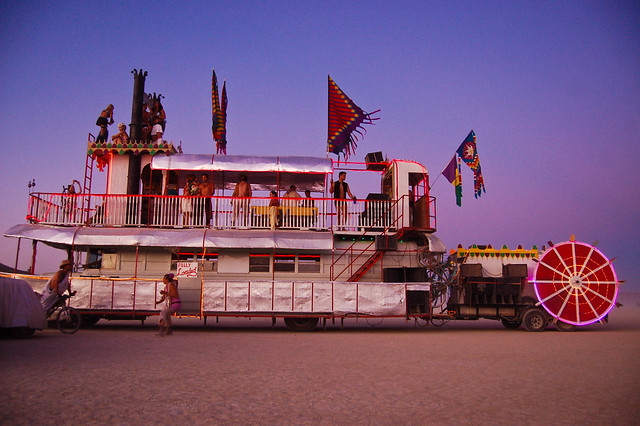 this giant steamboat was pretty elite, and looked even better once true night fell. click the cut for a not so safe for work view of the gorgeous masthead mermaid. 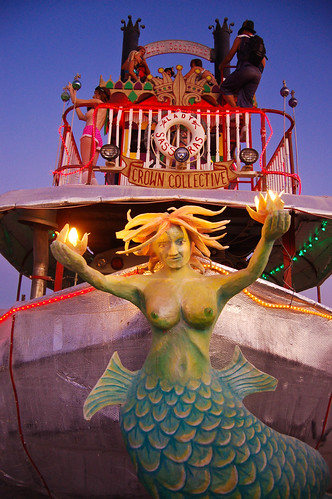 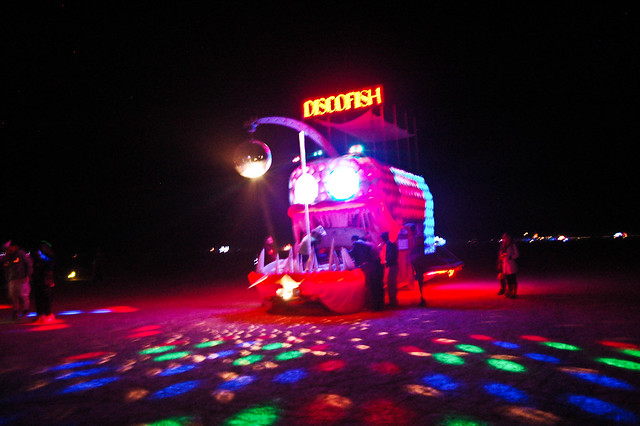 i was very fond of discofish. we spent a lot of time sitting on his side padded benches that folded down. however he was very bass heavy and occasionally if he parked near to other bassheavy art cars it would make me physically ill. pretty sure i threw up near the side of him post-burn after the man went up. sorry discofish! 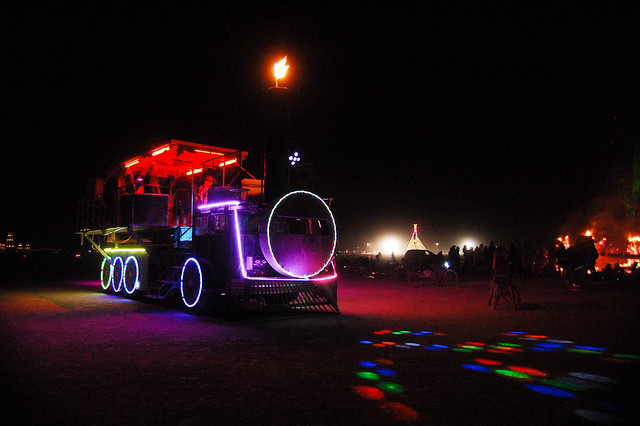 we called this the night train. it had a pretty killer light display that rotated through the rainbow on all of it's outlines. this was a train heavy year, which i am NOT complaining about, i absolutely love trains more than most things. one of the trains which i tried and failed to photograph, was life sized to the size of an actual freight train, and had about 5 cars attached that it pulled across the playa. each car had a different light theme, a rocket, a rainbow coal car, and several other lit up themed cars trailing behind it. it was so long and magnificent that i did not have a lens wide enough to do it justice. anything that gave me a full view of all the cars in the line made them entirely too small to pick out the detail. not to mention no still image could do the engine justice: it was a rainbow cascade of constantly shifting light patterns. 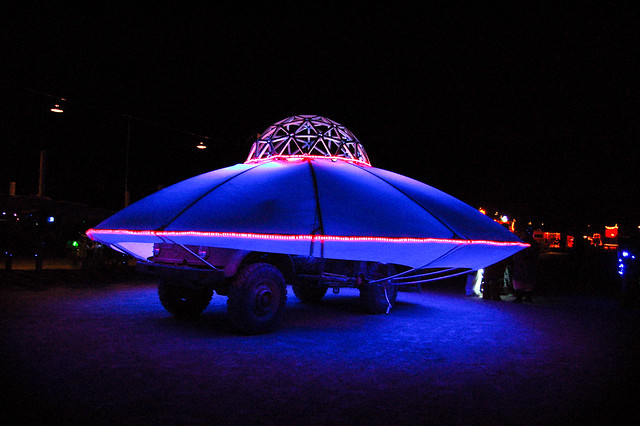 this was about the best ufo i saw out there this year, which is pretty surprising since there are usually some good ones. i much prefer the metal streamlined 1950s saucer look, but this one was ok and the lights made up for it's lack of post-deco structure. 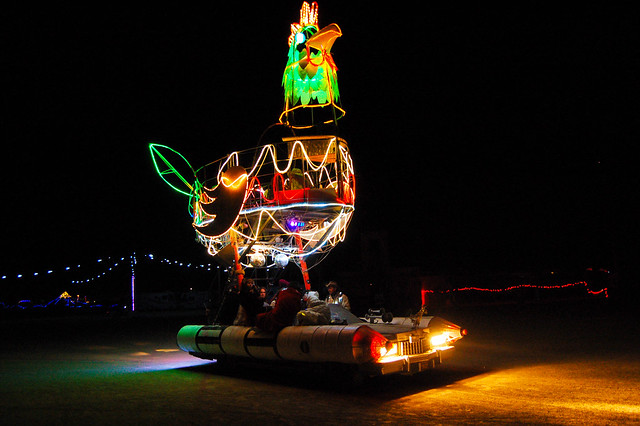 mooflyfoof said: "is that a giant chicken on top of a lightspeeder? why yes, yes it is!" self explanatory really. 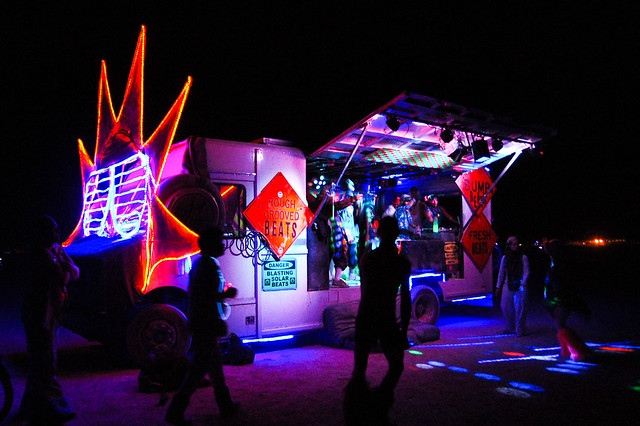 even tho this truck played non-stop dubstep, i cut them some slack because at least they were funny about it. a+++ use of topical construction zone signage. 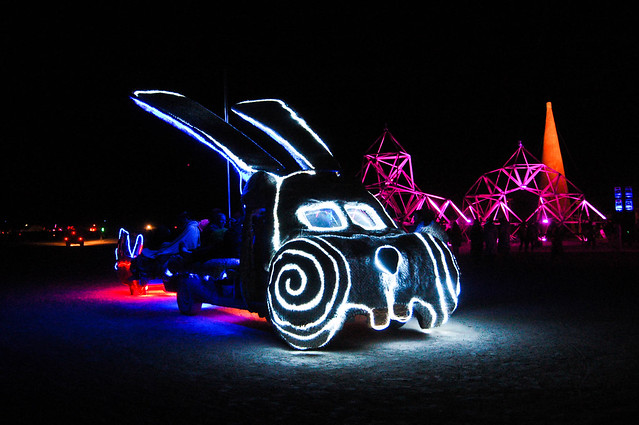 as we were camped next to bunnycide this bunny car took on a special meaning for me. i couldn't help seeing him as one of the many deaths of dead bunnies adorning the camp next door. 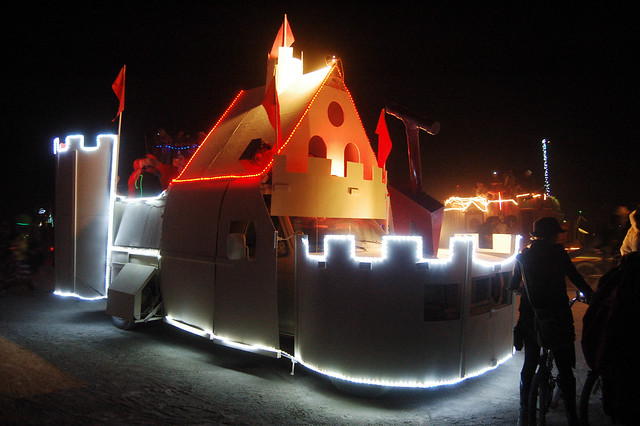 friday night as we headed out for an evening of adventure before ending up at the trojan horse burn, geoff exclaimed to us "have fun storming the castle" as we toddled off in search of fun. we found this castle art car and spent the night with them. as they passed us early in the evening we stuck out our thumbs and hitched a ride along with them to the other side of the city. we made friends with a bunch of international wanderers, from germany, switzerland, and much of eastern europe, and spent the rest of the evening careening back and forth across the playa hitting up all the best parties before ending up at the giant rave that surrounded the horse burn. 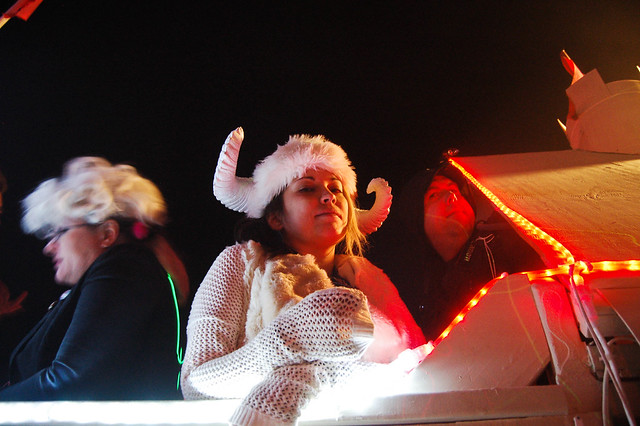 renee shows off our judging look. you think we aren't judging you? well fuck you we are. 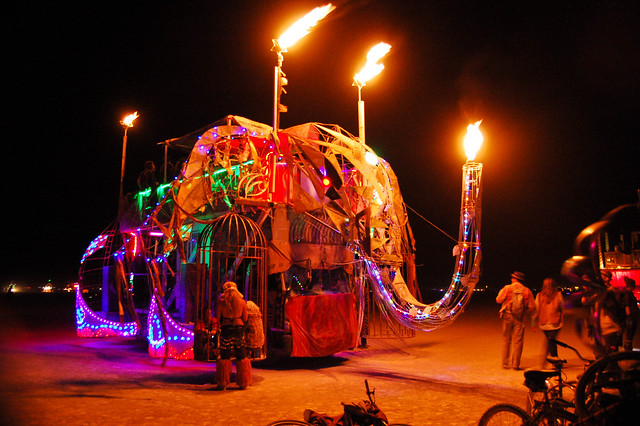 sometimes hitching a ride doesn't work out so well. after walking from 10oclock back to 6oclock we saw the ganeshbus parked outside a friend's camp. we hooked up with some friends and heard that the ganeshbus was heading towards 2oclock, right where we wanted to be to see a friend's dj set at one of the giant rave camps (non-dubstep brand). after boarding and hanging out on the top level with our friends the bus got under way. unfortunately they decided to head back to their own camp instead of continuing on to 2oclock, which left us right back where we started trying to escape from, the 10oclock side of the city, aka project "play as much dubstep as you can, as loudly as possible, all right next to each other so you can't tell which song is which". not like you can with dubstep anyway. there, i said it. 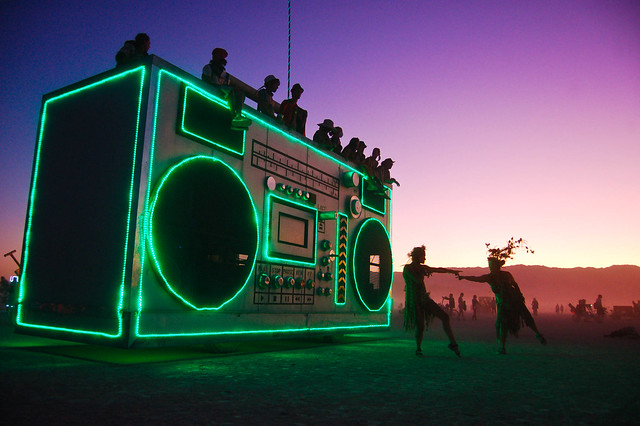 my favorite car tho was the boombox, despite their propensity to play all the dubstep possible, as as loud a volume as they were capable. such a simple design, but the lights and the paint combined just right to make it look seriously polished. 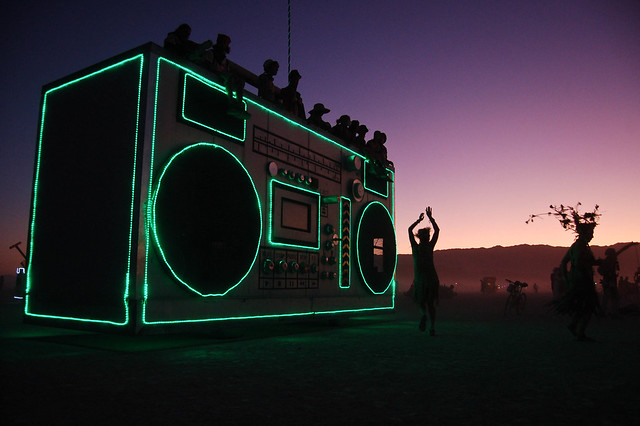 always surrounded by a dancing crowd (and even if you can't help but look totally stupid dancing to dubstep, at least in still images one dancer usually looks just as silly as the next. so these images came out pretty all right. look, only dubstep parrot can dance to dubstep and not look totally ridiculous. and that is because he is a parrot.) 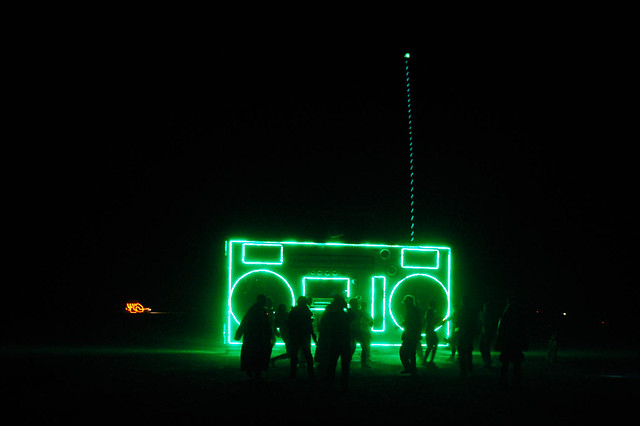 next year i want to make a bone ship/thunderbird/roc of death type of thing, something super scary to breathe fear into those who are tripping their asses off on hallucinogens. something where you can intone "I AM THE LORD OF DEATH AND I AM HERE TO LAY CLAIM TO YOUR SOUL" with complete believability, at least to those under the influence. not that i am PLANNING to do that, but you know, some people have their hobbies, i have mine. and going around posing as the lord of death and demanding people's souls happens to be one of them.