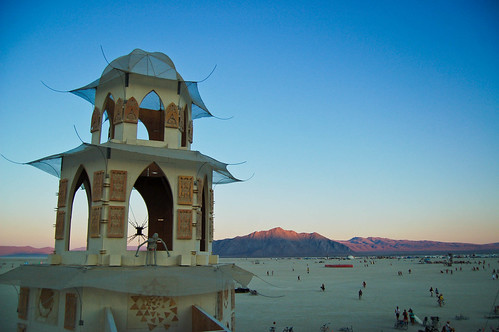 temple at dusk, a photo by hep on Flickr.

and now, finally, the last in this year's series of burningman posts. and i promise, the last post for at LEAST a year, because i always come back vowing to skip the next year due to built up annoyance. plus, as

sister_anne so rightly pointed out, going to burningman means you miss the absolute best week in san francisco! the week where there are empty tables at zeitgeist *every night*, no line at dottie's, and you can bike in the absolute comfort that there will be fewer than 10 bikes in a block of bike lane at any given time. dolores park feels spacious, no line at tartine!! and soma feels positively deserted, much as it felt back in the 80s when it was just warehouses for freight companies. you can take your bike on caltrain without there being four bikes to a rack, and risk of bump, and driving around the city feels almost enjoyable, instead of a constant act of incredibly enraging frustration. there are even good parties, balsa man is an old favorite, and last i heard people were still doing drowning man. the city feels full of camaraderie for those who are "left behind" (aside: i always wanted to do a parody of the left behind series, about people who are left behind in sf during burningman. there are so many funny plotlines you could do. like "where are the baristas at ritual coffee?!?!?!" and "when is death guild?" that shit writes itself.) the city is basically emptied of 100% of the people who seriously annoy me, and it's like i get my city back for a brief interlude. 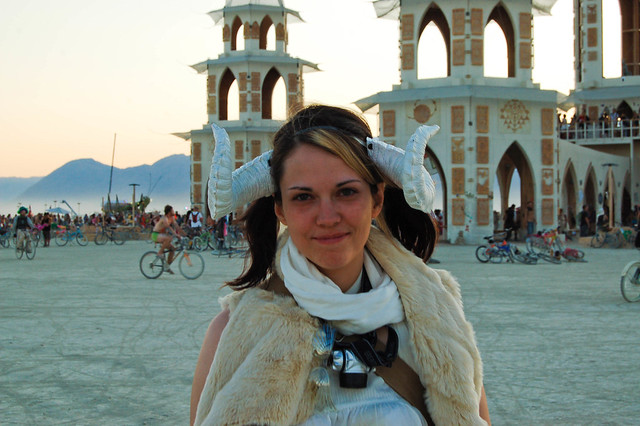 this post is about my last favorite thing at burningman: the temple. the temple is built each year starting in 2000. for the first few years an artist named david best built the temples. i was lucky enough to see these temples, and they were one and all amazing. his work is very much like victorian gingerbread, crossed with old gothic architecture, crossed with balsa wood dinosaur skeleton puzzles. here is an image of the 2000 temple of the mind and here is one of the temple of tears in 2001. unfortunately many of my own images from those years have been lost, a tragedy i still mourn, but this is the shot of 2002's temple of joy, a shot i try to capture every year of the temple that we attend bm. eventually david best passed it off for awhile to another artist, mark grieve, who did more of outdoor obelisk style temples. they never felt like the real temple to me, in those years uchronia, a large sculpture built by the uchronians, affectionately nicknamed "the waffle" felt like the temple. after passing it back and forth for a few years, both artists gifted the concept and creation to the community, now teams of volunteers work to design and build it to carry on the tradition. one of the few years i was sad about not going was last year, the temple of flux in 2010 was more of the abstract frozen motion architecture of the waffle, i would have liked to have shot that. it was also a year with wet stormy weather which always makes for great atmospheric photos out there, if not very much comfort (desert playa + rain = mudbath central) 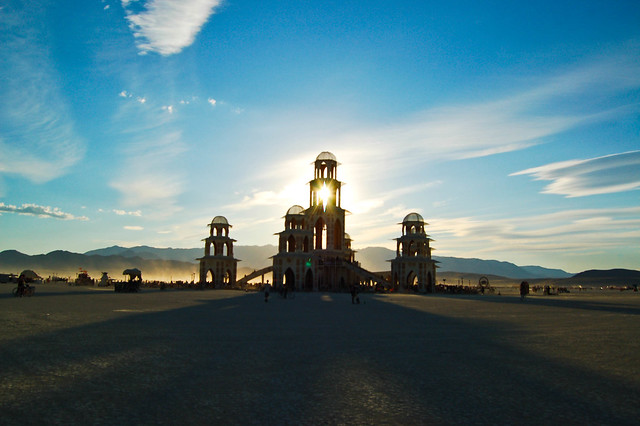 so what is the temple? this year's temple was called the "temple of transition". the temple is many things, and one of them is a place of grieving and moving on. people use it for all kinds of moving on types of rituals, from leaving images of loved ones, to letters by those lost, to charms, belongings, remembrances of those gone, to inscribing messages on the walls to ones who have gone away in a variety of manners (not just death. the theme is just one of general loss or letting go. if you look at the messages all kinds of loss are represented, from missing children, to deceased parents, to ex-relationships, to army buddies both living and passed away, to loss of youth, etc etc. many kinds of loss or other such themes are represented throughout the inscriptions and left items.) at various times i have left effigies to my brother, to my grandparents, to my aunt zane whom zane was named for, to my many lost familia on the other side of the world, to friends who have passed away often far too young. i have been parts of large group effigies for people in the burner community and sf bay area community. it can very much resemble the formalized grieving of a traditional catholic wake or the more jubilant grieving that often accompanies dia de los muertos celebrations. you smell sage a LOT in there. 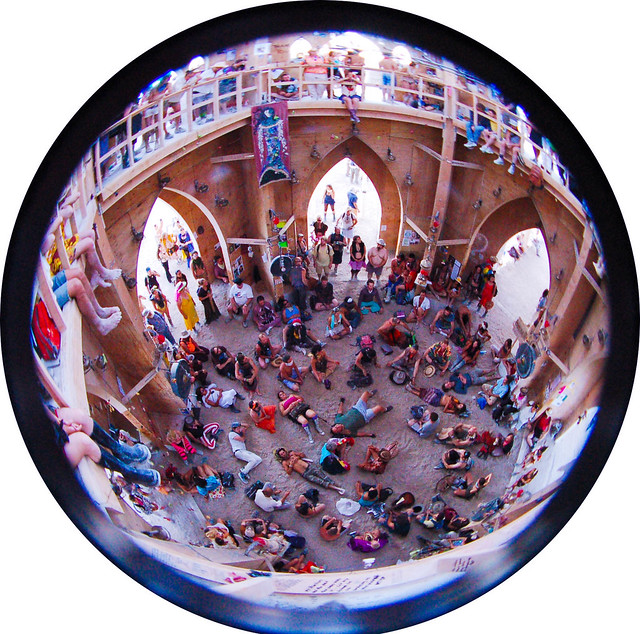 but all sorts of happy events happen here as well. you will often find weddings happening, or engagements, both planned and spontaneous. as seen above yoga and meditation rituals of all kinds are performed at every hour of the day. people gather to play beautiful music for weddings and dancings. candles burn for things both sad and happy. hundreds of thousands of revenant eyes to view the beauty of the temple itself. art cars rove past on the open playa pumping out dance-hungry basslines which lifts the mood. often you will see someone sobbing with grief, someone delirious with happiness, someone consumed with some loss, and someone who has just attained true inner peace within the same viewline. 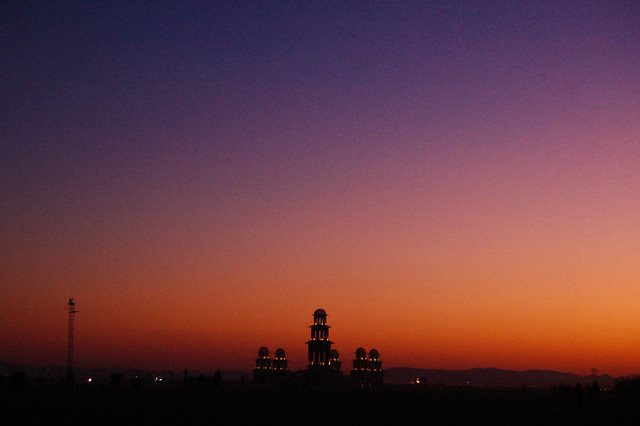 the temple to me personally is always a place of peace and letting go. by the time i reach the temple to lay affects of someone i have lost, the harsh brutal part of grief has usually long since faded away. only when i lost my grandparents was it still a very close raw part of me, and then i left lace crocheted rosary made by my grandmother's hands and a raw rivet from the golden gate bridge pulled by my grandfather's. (note to new people: i come from 5 generations of ironworkers on both sides. every bridge in this bay, including the bay bridge both old and current, and golden gate were built by the hands of at least one of my family members. my grandparents died at the private opening ceremony of the carquinez bridge when they were hit by a freight train going 60mph at an unmarked (because of the construction) railway crossing. a high speed freight train coming in directly for you at 60mph makes no noise until it is right up on you because all of the noise is coming from behind the main cab. always always ALWAYS be careful at every crossing and never cross unless you are absolutely sure you can make it all the way. even if they looked they probably never had a chance as the train was coming around a sharp bend at the time.) 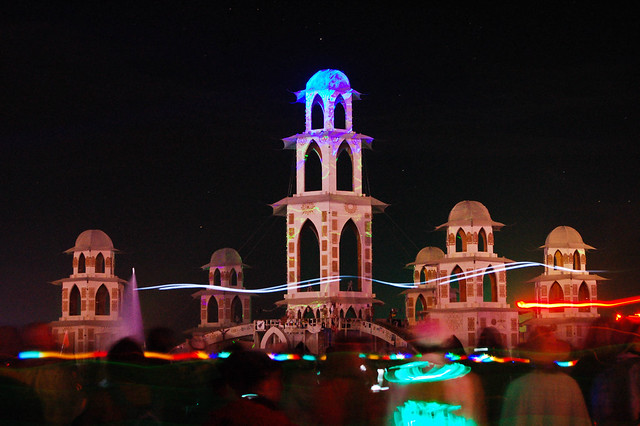 people gather on at the temple on sunday evening of every year starting at around sundown. art cars ring the structure like in the rest of the burns, but are usually playing much more somber music, or no music at all. people set up blankets and chairs, waiting in small groups or alone for the burn time around 10pm. the atmosphere surrounding the temple while people wait is much more restrained than at previous burns in the week. whereas the horse burn kicks off the start of the "real party" (a true bacchanalia ritualized by fire) and the man burn starts the party of denial (ie "this party will be so good it will never end") the temple burn signals the end. not only of whatever loss you are giving up, but the end of burningman altogether. nothing left to do but pack all of your dust laden belongings up and start the long exodus back to the "default world", and begin another year of waiting for your summer break labor day party week extravaganza. at around 930 they have a formal ceremony at the front of the temple before starting the burn. usually you can never see this unless you are an early arrival, but being too close means again the threat of crazy embers borne aloft by the convection of the superheated air around the burning towers. 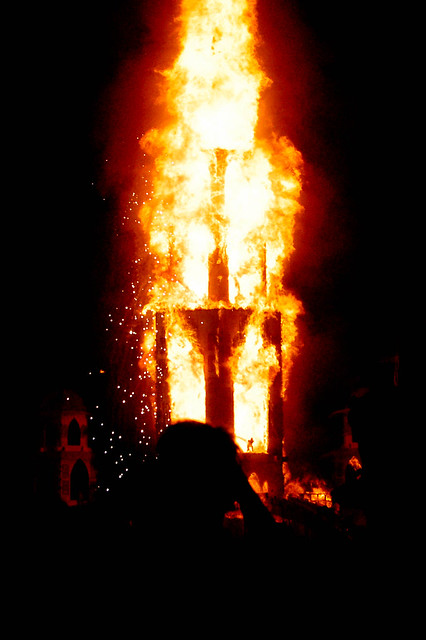 the burn does not start with fireworks, other than sometimes some sparkle flares. instead fire is taken into the temple and it starts from the inside out. this year's temple was full of gothic spires and lofty towers, the central tower caught first with the fire eventually spreading out to the supporting towers. no one cheers as in other burns, instead there is almost dead silence all around with only the crackling of the flames reaching hundreds of feet into the air. it is like the entire crowd of 30,000+ people collectively holds its breathe without even a sigh. it usually takes about 7 minutes for the temple to be truly a burning firey inferno. huge gouts of flame bellow out of windows 50 feet off the ground. eventually towers start to collapse in on each other one at a time, often only the skeleton left, all supporting frills and features having been blasted off by the flames. 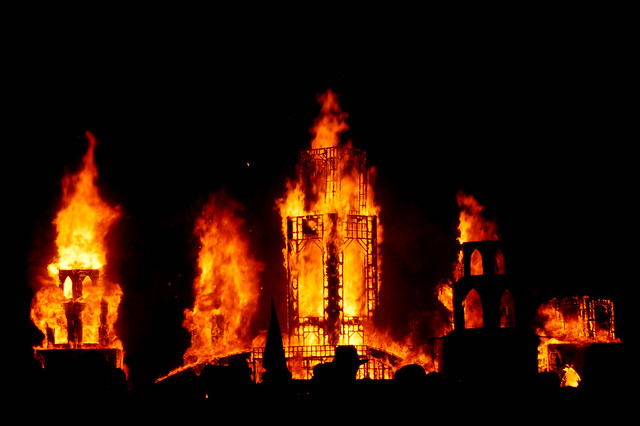 this i think will be the last year i want to watch the temple burn in person. as the towers fall, usually around you people start to sob as their grief overwhelms them. but in the last few times we have been, always there is someone sobbing crazy loud over the fact that burning man is over, not in actual grief or loss for something real, just the end of the party. not that i am grief comparing, i fully understand how sad it is to have something super fun end. but that kind of crazy loud sobbing over something so trivial compared to the losses of others surrounding you who are also crying in grief just strikes me as so petty and attention hoggy, it cheapens the grief of those around you listening and takes their focus away from their own letting go rituals which they might be in the middle of. nothing like listening to some sparkle pony going on and on about whyyyyyyyy does it have to end while you are busy mourning the loss of your father who just passed away from leukemia, you know? i think next year we will ditch out on sunday morning and just watch the temple burn from the webcast. that way we avoid Exodus, the sometimes 8hr long wait to get from inside black rock city to the main one lane each way highway back to reno. this year we left directly after the burn (literally rode our bikes back to camp before the towers were even finished burning and threw them on the bike rack having already packed everything else.) it took us 2 hours for a complete exodus and another 2 hours to get to reno proper. thats 4 hours to go 77 miles. *i*f* we go back next year i think leaving sunday morning sounds a lot less frustrating both in getting home quicker and being less frustrated by fools around me.