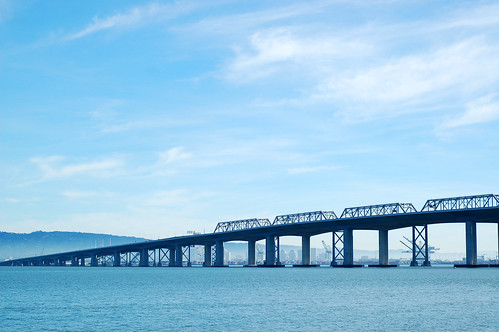 bay bridge east span, a photo by hep on Flickr.

Tonight as of 8pm the East Bay cantilever span of the Bay Bridge in San Francisco will close forever. It's not a very picturesque bridge. In most articles or references, not having to do with the replacement construction, its more graceful sister the Western Span is the star. But the Eastern Span is deeply entwined in Bay Area history. Some of us grew up on the story of when the jet hit the Bridge. Many of us remember personally when the Bridge broke in the earthquake. The earthquake was an event that left a huge impact on people living in the Bay Area at the time, and the Bridge breaking along with the Cypress Freeway collapse were the most visible scars left in the aftermath.

For me personally the bridge has a lot of connections. Some of my family worked building the Bay Bridge. Most of my family worked on the earthquake repairs and retrofits. My dad worked on the Temp Span as his last job before retirement. My whole family history is wrapped up around the Bridge. I learned to photograph via the bridge, the Eastern Span was one of my first photo 101 assignment subjects (light and shadow iirc, b&w). I have worked covering the Bridge for both media and commercially. I have been a part of protest actions involving the Bridge. I might have at some point in my youth trespassed the Eastern Span in a variety of ways in the name of art.

No one can deny that San Francisco is changing more and more every couple of years. With rents rising, whole neighborhoods are getting priced out. People have to leave, friends, family. Most of my family has had to move away, some farther than others. The Giants don't play at The 'Stick anymore. 2013 is a year of more change than usual. Something called an America's Cup is happening. The Niners are moving to Santa Clara, wherever that is. Candlestick is getting demolished. And the Eastern Span is going to get replaced by something shiny and new, which I am sure I will eventually come to love. But it kind of seems like an allegory for the city as a whole. Most of the older well-worn, functional but cool things about the city are being replaced with showy, glossy versions. We are getting a glass cube Apple store, like we don't have enough glass monoliths downtown, or Apple stores (p sure they won't stop until everything is glass and brushed metal.) Tech elites slowly replace all of the working class areas of the city with carefully cultivated rip-offs. The area of SF that is still the hometown I grew up in slowly shrinks every day. I know the old bridge has to be replaced, but that doesn't mean I am not going to be a little sad that it has to go. And I know it's not really a symbol of the ever-changing landscape of the City, and the feeling that I may not have a place in the new SF, but tonight for a moment it seems like it is.